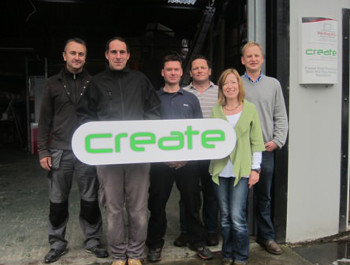 Create Signs’ growing teamUK based Create Signs has moved with the times since directors Ian Lamont and Andrew Fogg set the company up in 2002, but with core values of creativity, quality and service at its heart, the Bristol based sign maker is entering its second decade with a spring in its step.

Visit the company's premises (located on the A38 near Churchill, to the south west of Bristol) and they're a hive of activity; with a workshop stocked full of kit and substrates, primed to meet the needs of small local businesses right through to servicing large healthcare, education and retail contracts. In their ten years of business, the team have won prestigious new clients, but just as importantly, retained long standing customers at the same time.

Ally Jones, responsible for Create Signs' marketing and new business initiatives has put in place a number of processes at the company, leveraging networking, social media and good old fashioned hard work to ensure Create's name is in the frame when it comes to winning new contracts.

A vibrant Twitter feed, regularly updated blog and installation showcase on the company's website, frequent networking sessions and a willingness to work with local design agencies as a trusted supplier has seen business increase consistently and the company's reputation remain strong. "Having a strong online presence is important," says Jones, "It ensures we're perceived as a professional operation from the outset, which when organisations are pitching for business, can be the difference between receiving a phone call or not."

Being creatively led (as the name suggests), Create Signs has a hard won reputation for delivering striking installations. Within the education sector the company is starting to stretch its legs with an upsurge in interest from newly formed academies seeking to market their curriculum to young students and provide an engaging and sophisticated backdrop to their studies. Recent new business for Create has included an impressive 6m wide typographical work for Redland Green School that featured workflow the company has gained following its investment in a Mimaki CJV30-160 printer / cutter.

Spending considerable sums of money each month buying in print, the purchase of their own wide format system came about following a visit to Sign & Digital UK 2011. "The Mimaki enables us to turn jobs around quicker, provide better customer service and ensures we're in control of how we manage our jobs," states Fogg. "We did consider alternative printer / cutters but we're very pleased with the CJV30 - and we're making substantial savings now it's installed."

The 1.6m wide integrated printer / cutter  was purchased through authorised Mimaki reseller, Graphic Printing Technologies and Fogg is complimentary of the service received from both GPT, and UK distributor for Mimaki; Hybrid Services. "The support from both companies has been really knowledgeable and helpful. We were new to running a wide format printer so all the advice we've received has made a difference."

Not that you'd know Create Signs had only had its own digital print capability for a few months if you looked at the Redland School work. The Bristol based school approached the company looking for a visual means of reflecting its ethos of positivity and inclusivity in order to inspire pupils in their day to day life. The colourful word clouds and vinyl graphics were designed by new recruit and junior graphic designer at Create, Calum Bradley before being printed and cut on the CJV30 and applied to room and hall walls throughout the school - including one area of the striking installation which spans three floors of the atrium in the main building.

Thinking out of the box 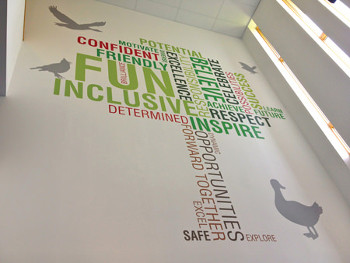 Redland Green School’s 6m wide typographical installation is actually a print and cut jobThe technique used by Create for this job is echoed in another substantial contract for public space decoration - at Weston town hall. Winning part of an estimated £25m contract, Create Signs delivered window and wall manifestation in both public and office space but what is interesting is how they thought out of the box to strictly adhere to the colour scheme used for paint on the walls, pillars and fixtures around the building. Rather than trying to match the shades with stock coloured vinyl, Create opted to reproduce the work in printed form and use the Mimaki's accurate contour cutting to plot around the outline. The end result is a perfectly matched colour scheme that still exudes the clean lines of self adhesive coloured vinyl.

Lamont added in full colour print on etched vinyl for large expanses of window manifestation, married to matching printed vinyl as it continued around the walls, delivering a seamless, colourful and practical job that enlivened a space used by both the general public and council workers.

Bradley's appointment as junior designer came about following Jones's determination to ensure something was done about halting the likely skill exodus in the sign industry. By employing young minds and instilling industry skills, she was confident that in time, the industry would remain in safe hands, but her first attempts at recruitment were disappointing. "The poor attention to detail and overall quality of applicants from the government's apprenticeship scheme left me downhearted, but Calum approached us independently and fitted the bill perfectly," she said. Bradley is a graphic design graduate who specialises in typography and is now enjoying being trained in digital printing, graphics application and general sign production.

It's not just recruiting and working with the right people that are important to the team at Create - doing it the right way is at the heart of their way of working too. Be it the way the company manufactures its products - "We've always been quality led and we'll encourage our customers to invest more to get a better, long lasting sign" says Lamont - or its commitment to sustainability in an often demanding marketplace, the team go about things in the same way. 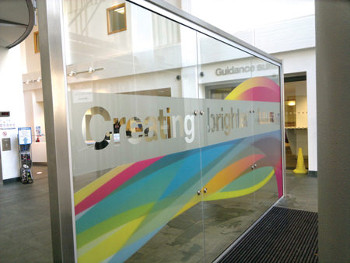 Creative use of materials and digital print are hallmarks of the company"If you think about it, you can do it," Jones put it simply. "We're more and more required to show our environmental credentials, so Hybrid's Let's Do More cartridge recycling scheme has a knock on effect for our customers too." Clearly understanding of the underlying message of the rebate linked waste management programme, Jones is keen to promote how lots of little things can add up to a big difference. "We've even gone as far as putting skylights into the ceiling above our design space," she says, "and its cut our electric lighting down a noticeable amount."

On the outside - Create Signs is a savvy, design led sign maker, but delve a little deeper and you'll find a company that's not just capable and committed to providing a better product but committed to how they go about it too.

Follow them on Twitter for an unique take on life in the sign industry @createsignsuk, take a look at some of their impressive installations on their website at www.create-signs.co.uk or give them a call on 0044 (0) 1934 853 888.