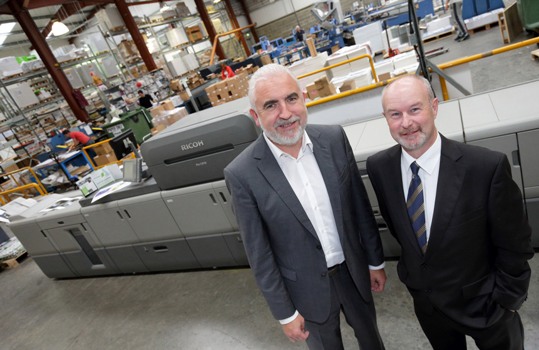 Pictured are (L-R) Padraic Kierans, managing director of Anglo Printers, with Paul Kealy Production Print Division of Ricoh IrelandRicoh Ireland has announced that Irish based Anglo Printers has boosted its revenue and customer base following a new deal with Ricoh Ireland worth almost €200,000. The investment involved the installation of Ricoh’s most advanced production print press in Anglo Printers’ Drogheda, Co. Louth, premises.

In a highly competitive market, Anglo Printers maintains that the Ricoh Pro C9110 - the first-ever sold in Ireland - is giving the company an immediate edge over its competitors. It added that Ricoh’s digital print solution has directly led to extra revenue for the Louth-based printer, through extra work from existing clients and new contracts. Having secured 10 new digital clients in just eight weeks, the company expects a full return on its investment in 18 months.

The company also confirmed that its new partnership with Ricoh Ireland has enabled Anglo Printers to increase digital production speed by 260 per cent, along with upping print capacity by a huge 520 per cent. Just two weeks after installation, the company had to hire a new staff member in order to double the machine’s operational hours.

Established 32 years ago, Anglo Printers was originally set up to serve the horse racing industry; printing race cards and brochures. It has since diversified to meet an ever-increasing demand for its full suite of services and now counts Irish Rail, Enterprise Ireland, Turkish Airlines and Flogas amongst its regular clients.

With two overburdened Komori B1 lithographic presses, Anglo Printers sought to migrate many of its short-run jobs to a new press, as well as improve on the quality and performance of its existing Xerox 5000 AP. Keen to increase its digital printing output, the company decided to welcome proposals from all major printing service providers. In the end, the team found that Ricoh met their requirements on every level.

Ricoh Ireland installed the Ricoh Pro C9110, along with the Ricoh Pro C 651EX - a light digital colour production press. Anglo Printers was able to use both presses on the day of installation. Ricoh also gave full training to staff members and continues to offer training and technical support to the Anglo Printers team.

In further comments, Anglo Printers said it was impressed with its choice of machine, and partner, immediately. The image quality matched that of the Komori B1, thanks to Vertical Cavity Surface Emitting Laser (VCSEL) technology. The press can reach speeds of up to 130 A4 pages per minute, helped by the new vacuum paper feed. It fits the diversity of Anglo Printers’ jobs since the new colour production printer can print onto uncoated, textured and coated media from 52gsm to 400gsm. Its output capacity, meanwhile, can reach one million sheets per month.