The scale of this event and the amount of print media was enormous. 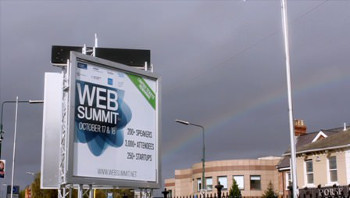 Large Format V-Board Signage RDS Dublin based Select Digital Print Group was chosen to be the one main digital print media supplier for the Dublin Web Summit 2012, Europe's largest tech conference which was held in the RDS, Dublin this year.

Over 200 international speakers and 4,000 plus attendees from 50+ countries descended on the city for the event on October 17 and 18th.

The Web Summit attracted CEO’s from many multi-billion euro businesses and 300 start-up companies from all over the world exhibited in the Start-up Village. A significant number of international investors and media also descended on the capital for this spectacular occasion which was broadcast nationally and globally as well as via bloggers and social media.

Select Digital is an Irish-owned and operated printing house specialising in the design and printing of quality printed media at an ethical cost. It was established in 2003 by experienced print and design professional Tara Wilson-Black and to-day is recognised as one of Irelands leading digital print companies.

Philip A. Black, production director at Select Digital talked about the Dublin Web Summit and what role his company played in the proceedings.

“We were recommended to one of the main graphic designers for the Web Summit, Martin McKenna, who was responsible for sourcing all the print,” explained Black.  “The event was started in 2010 as a small affair but this year it had been scaled up massively. The show is designed to exhibit and promote all kinds of online media from social media such as Facebook, Twitter to hundreds of companies who have developed different online ideas and businesses to showcase their services. This year in particular there was a large emphasis on start-up companies apart from well established businesses.

Black explained that the work his company produced did not just cover the two day event itself but all the peripheral activities such as luncheons and dinners in places like The Royal Hospital Kilmainham and Christchurch.

“Select Digital produced everything from business cards, menu’s, programmes for the events, signage for various different venues around the city which were hosting breakfast seminars and evening entertainment, “he said. “For the main show itself we produced logo boards for 300 start-up exibitors, the main directional signage which was all around the RDS even down to ID badges for everyone attending the summit.”

Other work involved banners, branding and directional signage throughout the exhibition itself.

“We had to produce 16- 4m x 1.5m double sided hanging banners which were hung around the different halls,” continued Black. “There were also 40 - 3m x 1.5m hanging signs as well which were printed on 6.5 millimetre Corriboard and hung from balconies, railings and other vantage points. The Dublin Web Summit logo was printed onto 3 millimetre Foamex in various different sizes and then die-cut into different shapes and placed around the halls. Outside there was three main 2.4 m2 V signs running along the front of the RDS as well as a nine meter long ‘welcome’ sign produced on Corriboard which was placed above the main entrance.”

All the large format work was produced on the company’s digital presses which comprise of a Mimaki JV3 and JV33 and a HP Designjet 5500PS.The small format element of the work was printed on a Konica Minolta Develop + 7000 digital press and a Xerox DocuColor 242.

“For the period of time that Select Digital produced all the work in, it would be one of the biggest jobs that we have produced to date directly for the end user,” added Black. “We sat down and worked out that the amount of print media which was run through our machines, measured end to end, was just over eight kilometres. One further point is that in the 9 years this company has been in existence we have never missed a deadline, no matter how big a job is. And that’s saying something!”

To get some idea of the project please go to: