"The Reel in the Flickering Light” 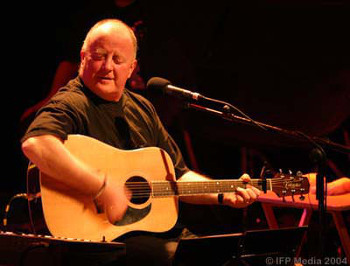 Christy MooreChristy Moore hails from Co. Kildare, Ireland. He found fame as a member of the legendary tradition folk band Planxty and since then has become a legend in his own right as a consummate solo performer. Back in the 1980s Christy teamed up with another famous musician Donal Lunny to form the innovative Moving Hearts band which sought to mix jazz into the folk-rock fusion.

Christy Moore started in the music business back in the mid-sixties. He was employed as a bank clerk when life suddenly changed for him due to a bank strike, which forced him to move to England. While in the UK he became involved in the folk music scene and spent a few years playing pubs and clubs around the country.

On his return to Ireland he was involved in creating the album ‘Prosperous’, today described as a classic and a milestone in the rapprochement of Irish music to the popular mainstream. The album brought together some of Ireland’s leading talents of contemporary folk music with musicians such as Andy Irvine, Donal Lunny and Liam O’Flynn. This one-off was to lead to the formation of Planxty, a band who would soon be at the leading edge of the revival of Irish traditional music.

Over the following years the musical status of Planxty became legendary throughout Europe. However in 1974 the band split up primarily to pursue solo projects. During this period Christy began to explore new ground as an artist recording a number of solo albums including ‘The Iron Behind the Velvet’ (TARACD2002) which featured Andy Irvine and ‘Live in Dublin’ (TARACD2005) with Donal Lunny.

In 1979 the original Planxty lineup of Christy, Andy, Liam and Donal reformed. The group recorded two further albums with Tara Records ‘After the Break’ (TARACD3001) and ‘The Woman I Loved So Well’ (TARACD3005). During this time there were several additions and changes to their line-up most notably the addition of Matt Molloy, flautist from The Bothy Band, who later joined The Chieftains and Bill Whelan.

In 1981 Planxty performed a Bill Whelan arrangement called ‘Timedance’ as the intermission piece for the Eurovision song contest, held that year in Ireland. It was later released as a single and is now included on Bill’s CD of ‘The Seville Suite’ (TARACD3030) released by Tara in 1992.

In the eighties Christy again went solo and began to establish himself as one of Ireland’s leading solo artists with a string of acclaimed albums and high profile tours.

In the mid-nineties Christy decided to take a break from the music for a few years. However by 2000 Christy returned to live performances with a series of Dublin concerts. Over the last few years he has released a number of solo projects including a television series, a live album and a 6 CD box set.

As a footnote to all of this I would just like to mention one song made famous by Christy. It is a called ‘The Reel in the Flickering Light’ and is based on Christy’s memories of drunken nights when he came home after drinking, then begin to write a song, adding the sober part the next morning. Although the original song was written by Colm Gallagher Christy often refers to the fact (when he is playing live) that he penned it after one such drunken night.

“As I was walking home one evenin'

I know this takes some believin'

I met a group of creatures!

Apart from the incredible lyrics, what sets this tune apart from many of Christy’s other songs is the arrangement. I’m not sure but I think the background is played on a harpsichord/keyboard and follows a running scale. It’s this innovative use of such a simple piece of musical structure intertwined with dazzling lyrics that just makes ‘The Reel in the Flickering Light’ in my view STUNNING! Do me a favour! Listen to the song and wait for the last part of it. Then you will understand what I am trying to say here.