WWRY comes to Dublin after 11 years 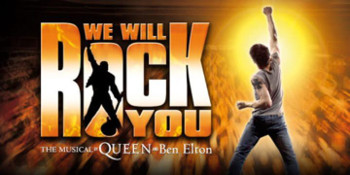 I wrote about Queen last year. You can see it and listen to all 34 videos here.

Buddy you're a boy make a big noise

You’re the rebel. You want to Rock the world. You’re the one who starts the revolution. Everywhere, the kids watch the same movies, wear the same fashions and think the same thoughts. It’s a safe, happy, carefree Ga Ga world.

It’s Planet Mall: All musical instruments are banned. However, the Company Computers produce songs and everybody downloads them. It is an age of Boy Bands and Girl Bands and Girl and Boy Bands. Ring any bells?  Girl Bands with a couple of boys in them that look like girls.  Boy Bands that look like girls. Nothing is left to chance; hits are arranged years in advance.  It’s all pre-planned.

Playin' in the street gonna be a big man some day.

Resistance is growing. Rebels form. Underneath the gleaming cities, down in the lower depths live the Bohemians. They believed there was once a Golden Age when the kids formed their own bands and write their own songs. They call that time, The Rhapsody.

You got mud on yo' face You big disgrace.

Rumour has it that somewhere on Planet Mall instruments still exist. Somewhere, the mighty axe of a great and hairy guitar god lies buried deep in rock. The Bohemians need a hero to find this axe and draw it from stone. Is the one who calls himself Galileo that man?

Kickin' your can all over the place.

But Galileo is a wanted man. The Ga Ga Cops are looking for him and if they get him first they will surely drag him before the Killer Queen and consign him to Oblivion across the Seven Seas of Rhye. But who is Galileo? Where is the Hairy One’s lost axe? Where is the place of living rock?

Is this the real life? Is this just fantasy?

Queen and Ben Elton’s We Will Rock You is in its 11 year. It was first seen on 12th May 2002 in the Dominion Theatre with Tony Vincent, Hannah Jane Fox, Sharon D Clarke and Kerry Ellis and is the longest running musical in the theatre, surpassing Grease.

The theatre holds 2163 people and the show is scheduled to run until October 2013 - at least.  It has had nearly 4000 performances so far, 12,000 people weekly, 5.5 million people at the Dominion and 13 million worldwide.  It is now the 7th longest running musical currently playing in the West End in a list that includes Les Miserables, Phantom of the Opera, Blood Brothers, Mamma Mia!, Chicago and Disney’s The Lion King.

Like Riverdance, it has a number of productions all over the world and it has been seen in five continents.

Caught in a landslide, No escape from reality, Open your eyes

The musical tells the story of a group of Bohemians, who struggle to restore the free exchange of thought, fashion, and live music in a distant future 300 years away where everyone dresses, thinks and does the same. Musical instruments and composers are forbidden, and rock music is all but unknown.

Ben Elton has created a nightmarish vision of the future in which live music is banned, all instruments have been destroyed and the entire population lobotomised by the Globalsoft Corporation, capable of living on the iPlanet only through the internet.

Inevitably, a few rebels have escaped, calling themselves the Bohemians, searching for the rhapsody of rock and roll ... and someone to lead them.

He just happens to be a guy called Galileo Figaro, along with his potty-mouthed girlfriend Scaramouche.

Look up to the skies and see, I'm just a poor boy, I need no sympathy

With 24 of Queen's biggest hits delivered in a show that boasts the scale and spectacle that marked the bands' legendary live performances, this is one of the most spectacular musicals to tour the world.  It compares to Mama Mia and Riverdance. Now don’t be a purist and tell me that Riverdance isn’t a musical.

On announcing the tour, Queen's Brian May said: "After our first 10 years in Rock Theatricality, this is the next giant step for WWRY - and the show will feature a brand new arena-size design - a big night out for all!"

The production is directed by Ben Elton, with Brian May and Roger Taylor as music supervisors.  Arlene Phillips oversees the musical staging and choreography.

"This show is all about legend," says Ben Elton.

Producer Phil McIntyre said "We are looking forward to taking this true Rock Theatrical out on the road again. We had standing ovations night after night around the UK last time and we can't wait to see that happen again."

Following the recasting in August 2012 of lead role Galileo which saw popular Legally Blonde cast member Alex Gaumond join the show, We Will Rock You has announced a new incoming cast to take over the roles of female lead Scaramouche, the show’s popular villain Khashoggi, and the bad-ass, loved-up rebel leader Britney.

At the same time, in what is sure to be news much welcomed by the show’s legion of regular fans, the producers have announced that popular cast members Kevin Kennedy (Pop), Brenda Edwards (Killer Queen) and Rachel John (Meat) will continue with the show through 2013.

New to the leading role of Scaramouche from 10th October 2012 was Lauren Samuels, an alumni of Andrew Lloyd Webber’s BBC TV Over the Rainbow where she received high praise.

Anyway the wind blows, doesn't really matter to me, to me

“We had the worst reviews in years, second only to Les Miserables,” said Brian May, founder member of Queen.  As its legendary guitarist, he continues to oversee the ongoing legacy of the band now with Roger Taylor despite the tragic early death of Freddie Mercury in 1991.They have continued to make music, most recently at the closing ceremony of the 2012 Olympic Games.

Brian added: “We had two very fortunate things happen soon after we opened: one was the party at Buckingham Palace to celebrate the Queen’s Golden Jubilee in 2002, where we appeared on top of the palace with the cast singing Bohemian Rhapsody and We Are the Champions.

“The other was appearing on Michael Parkinson’s television chat show. With those two bits of television, people were able to see for themselves what was in the show and it became an avalanche, as people realised what was on offer.”

Like I’ve always said, who are these critics? Who listens to them? What do they know?

Unfortunately, I haven’t got tickets to go to the show, so if anyone cares to donate a few tickets . . . .