Grease is the word

“An artist is someone who uses art to run away from reality. There are no rules and regulations in the creative world.”  This is what Robin Gibb said of the real world. He preferred to live in his own world and he proved that throughout his 62 years on this earth. Robin Gibb died on Sunday 20th May 2012 after getting pneumonia while battling against cancer of the colon and subsequently of the liver. 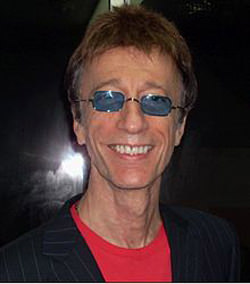 Robin Gibb"The family of Robin Gibb, of the Bee Gees, announce with great sadness that Robin passed away today following his long battle with cancer and intestinal surgery.  The family have asked that their privacy is respected at this very difficult time”. His family announced in a statement released by Doug Wright, Robin’s representative.   His death was announced at 10.30pm on Sunday night, 20 May, 2012.

Robin lapsed into a weeklong coma in April 2012. In February his doctors said he'd made a "spectacular" recovery from the disease, but he was soon back in the hospital for surgery. He had bowel surgery almost two years ago for an unrelated condition, at which time doctors discovered a tumour and diagnosed him with colon cancer. It appeared as if the cancer was in remission as recently as March.

He was the second disco-era star to die this week. Donna Summer — who was the Queen of Disco and such songs as "Last Dance" and "I Feel Love" — died of cancer in Florida on Thursday.  Two music icons dead in one week;  what has the world done wrong to deserve this!

Celebrities from every corner of the world paid tribute to Robin over twitter and the airwaves.

Justin Bieber told MTV: "I definitely listened to The Bee Gees. I'm not too familiar with them, but it's definitely sad what happened. My heart goes out to him and his family."

Max George of The Wanted said: "I love The Bee Gees. They're obviously legends and heroes of ours and people we look up to. It's a really sad loss. Our thoughts go out to all of his family."

Danni Minogue said: "We start believing now that we can be who we are - Grease is the word.  RIP Robin Gibb."

Peter Andre: "I am so absolutely gutted about Robin Gibb passing away. One of the true musical legends whom I was honoured to be friends with.  RIP:”

Cliff Richard: "We are a fraternity of people who sing pop and rock and Robin is another one of us who has gone too soon . . . The legacy will be what the Bee Gees did, which was stunningly good stuff, right on a par with The Beatles."

Tony Blair former UK Prime Minister said he would "miss him very much".  He continued "a highly intelligent, interested and committed human being.  He was a great friend with a wonderful open and fertile mind and a student of history and politics. My thoughts and prayers are with Dwina and all the family."

Paul Gambaccini described the singer as "one of the major figures in the history of British music . . . Everyone should be aware that the Bee Gees are second only to Lennon and McCartney as the most successful songwriting unit in British popular music."  He said that Robin had "one of the best white soul voices ever"

Mike Read, former BBC Radio 1 DJ, who was a family friend, said: "Robin had the voice, the pathos, and he was a great writer.  He had a gift for melody and a gift for lyrics and left a phenomenal legacy, a phenomenal catalogue."  He added "They had every award, every gold disc, every platinum disc, the Grammys, the lot, and had been doing it so long but were still so good at it."

Dionne Warwick, whose biggest hit Heartbreaker was written by the Gibb brothers, said of Robin: "He was wonderful. He was a jokester. He had an incredibly witty sense of humour and was fun to be around. All three of them were sensational gentlemen first, just fun loving guys."  She said "I think a lot of it has to do with their sense of family and being together as a family. I know exactly what that means, because I come from a family of singers. That is very important, to be connected. They loved each other very strongly and showed it, and it was a joy."

John Prescott: "A good friend, a brilliant musician and a man who turned all of us into wannabe Travolta’s."

John Travolta: 'I thought Robin was one of the most wonderful people- gifted, generous, and a real friend to everyone he knew. And we'll miss him.'

Recording Academy president Neil Portnow predicted that fans will dance to "Stayin' Alive" and other songs Bee Gees songs for generations to come.  "Robin has had an indelible impact on music," he said.

La Toya Jackson tweeted “Why are we losing so many Great Artists. Robin Gibb you will be missed! And we will keep your music Staying Alive! #Night Fever, RIP

The Script’s official Twitter page said: ‘R.I.P. Robin Gibb. We met Robin+Barry in NY. Such a lovely guy. Prayers 2 his family. 2 many Legends being taken from us 2 early.’

Duran Duran’s official Twitter page said: ‘Sorry to hear about the passing of Robin Gibb of the BeeGees. Our condolences to his friends and family’

Cyclist and cancer survivor Lance Armstrong added: 'RIP Robin Gibb. Continues to sadden me to see cancer take our loved ones. Gotta put a stop to it.'

Following a relapse last month, Robin’s wife Dwina, 59, spoke of her joy after he woke from a 12-day coma despite being given just a 10 per cent chance of survival by doctors.  She had been told to start making plans for his passing as he slumped into a coma after contracting pneumonia.  Dwina and her family had held a constant bedside vigil for him - and had been playing his favourite music to try and rouse him.  She said that he cried when she played him Roy Orbison’s 1962 song Crying.

But Robin defied the odds and regained consciousness as music from his Titanic Requiem was played for him when he was in a coma.  He had been due to premiere the collaborative classical work with his 29-year-old son Robin-John in April, but the event went ahead without him due to his poor health.

He first felt the illness while on stage in Belgium in August 2010, and later had an emergency operation for a blocked intestine.  He cancelled a series of shows in Brazil in April 2011, after again suffering from abdominal pains.

The procedure sparked memories of the deaths of his twin brother Maurice, 53, who died of complications from a twisted intestine in 2003.

Their younger brother Andy also died young. He was just 30 when he died of myocarditis caused by a viral infection.

After his successful surgery doctors advised him to have a scan, but he waited for eight months before going ahead, afraid of what he would be told.  He admitted: 'Of course I was scared, like most people in my situation would be.

'I just didn't want to be told any bad news.'

When his wife Dwina and son Robin John eventually convinced him to have the scan, doctors found he had bowel cancer which had spread to his liver.  He said: 'I didn't cry, I just went into shock. I lost my appetite. I didn't want to eat, and I certainly couldn't sleep. I'd been in denial for so long.'

He was put on a course of chemotherapy, while Dwina - a druid priestess - also gave him health foods and herb teas in a bid to fight the disease.  He explained: 'The illness and the untimely death of my brothers made me conscious of the fact that - rather than just think about it - it's crucial that you do today what you want to do.  'Now I know how precious time is and you can't put it in the bank.  'I intend to make the most of every single second that I've got left.'

Robin Hugh Gibb was born in Douglas, on the Isle of Man, on 22nd December 1949, an hour before his twin, Maurice. Barry was three years older. Their father was a jobbing drummer and the boys grew up in relative poverty in Manchester. “I can remember my dad sitting under a 40-watt bulb counting pennies, trying to make them last until Friday,” Robin remembered. “The evening meal was a sixpenny bag of chips divided among us all. But kids don’t question that. We didn’t think we were poor then. We only knew we were poor later.”

Robin and Maurice left school at 13, and with Barry they began performing in local clubs and theatres. Robin remembered in 2003: “We were writing music even as young kids, we created a world into which a lot of our friends couldn’t enter. We wanted to make music all our lives and it evolved to a point where the only people who could understand that were the three of us. We didn’t feel comfortable with anyone but ourselves. The three of us were like one person.”

From the very beginning, they concentrated on their close harmony vocals and detailed arrangements that would become their uniqueness for decades to come.  Soon they recorded an album which broke into the local charts.

The rest, as they say, is history and the full Bee Gees article and videos are here.

The parties in Heaven are getting bigger with such greats that we have written about gone from us to the pearly gates, like Elvis, Ronnie Drew, Barney McKenna and here, Donna Summer, Whitney Houston and here, Johnny Cash, The Clancy Brother and Tommy makem, Maurice Gibb and Andy Gibb.

Robin: May you RIP. Our thoughts and prayers are with you and your family.