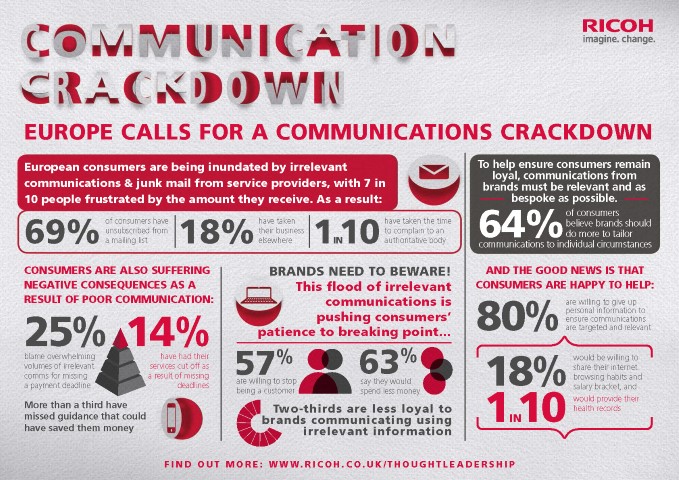 New research issued on 10th February 2016 reveals the inundation of irrelevant communications and junk mail is pushing consumer loyalty in the UK and Ireland to breaking point, with the majority (84 per cent) ready to take action against brands.

It relates to a survey which found that the abundance of junk mail sent out by Irish companies is pushing customer loyalty to breaking point. 47% of respondents stated that they find junk mail more annoying than their daily commute!

Some other interesting facts in the report:

The research, commissioned by global IT services company Ricoh and carried out by Coleman Parkes, examined the relationship between brand communications and customer loyalty.

Irrelevant communications, both online and paper-based, are a huge bug-bear for more than two-thirds of consumers in Ireland and the UK, who consider a quarter of what they receive to be junk. Nearly half (47 per cent) of consumers even see junk mail as more frustrating than their commute to work.

Beyond the mere frustration factor, consumers are suffering from being unable to sift through the flood of irrelevant information and poor quality comms. Nearly one in five (17 per cent) have missed a payment deadline, and 22 per cent have been unsure how much they owe for a service or even missed offers they were entitled to (33 per cent).

Brands need to beware that irrelevant communications are having a significantly detrimental impact on customer loyalty, trust and spend, and consumers are unafraid to bite back. Two-thirds (69 per cent) of consumers in Ireland and the UK report feeling less loyal to a brand spamming with irrelevant information, whilst a similar number would also spend less (68 per cent) and even go so far as to stop being a customer completely (57 per cent). Nearly a third (32 per cent) of consumers have moved their custom elsewhere, another fifth (22 per cent) have complained to a service provider, and over one in ten (14 per cent) have taken their complaint to an authoritative body. 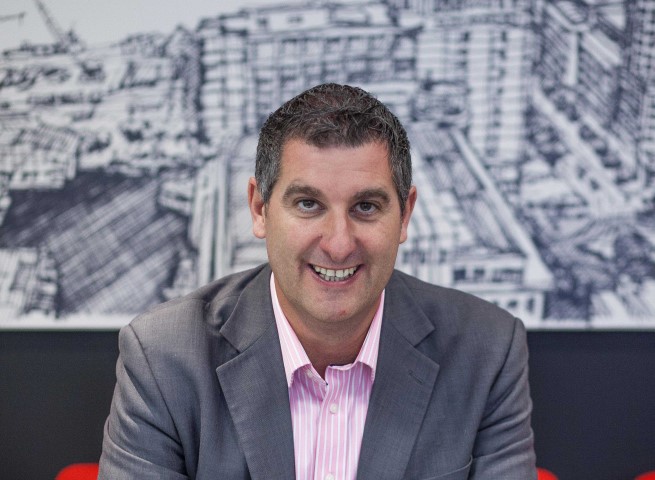 “Irish consumers are clearly saying ‘enough is enough’ when it comes to the irrelevance and high volume of communication sent out by brands and service providers. In the digital age, it has never been more convenient to instantly communicate with customers, but it is equally just as easy to spam.

“Brands need to find that crucial middle ground - communicating regularly and effectively without alienating customers. In today’s competitive landscape, businesses must do more to listen to their customers and provide a tailored, quality standard of communication - whether paper-based or digital, to ensure consumer loyalty.”

A majority of consumers in Ireland and the UK (65 per cent) believe more could be done to tailor communications to their individual circumstances. Three quarters (76 per cent) would even be willing to share personal data to make this happen, including occupation, salary, Internet browsing habits and health records.

Consumers also increasingly view digital communications as their preferred method to receive information from brands and service providers: for new offers and upgrades (71 per cent), statements and bills (66 per cent) and updates to terms and conditions (64 per cent).

Chas continued: “Consumers want to feel like a brand knows them and is creating the most tailored and bespoke communication to cater for their needs and interests. This should not be taken as an excuse to ‘spam’ though.  Using consumer data correctly is imperative here. No matter whether they have a preference for digital communications – such as online bank statements – or a mix of electronic and paper-based, there is simply no excuse not to harness this insights to ensure communications are truly targeted, which in turn makes them effective and powerful.”

The industries viewed as currently sending the most relevant communications to consumers are the public sector (39 per cent), financial services (37 per cent), utilities (45 per cent) and healthcare (32 per cent).  With the exception of utilities, these industries were similarly seen to be the most trustworthy handlers of customer data. However, no single sector is viewed positively by more than half of consumers, which goes to show significant work still needs to be done by brands across all industries to bring confidence in their customer communications up to scratch.

“Businesses across Ireland have to streamline how they manage, distribute and collect data to ensure consistency across all channels. Information provided by customers should be used to create promotional offers and updates that are not only personal to the consumer, but also highly relevant to them. This results in the customer feeling truly valued, which ultimately drives loyalty and tangible benefits to the business,” concluded Chas.