gets green light to increase numbers 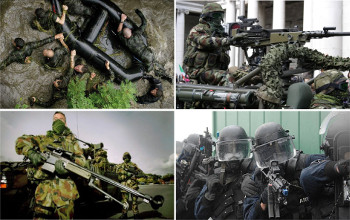 Irish Army ranger Wing.The elite Irish Army Ranger Wing (ARW) ("Sciathán Fiannóglaigh an Airm") are based in the Curragh Camp in County Kildare. The unit variably consists of 200 soldiers, and although relatively small they are one of Europe's most trusted 'Spec Ops' groups. The Army Ranger Wing (ARW) was set-up in the late 1960's with the help of the United States military, but did not become an official entity until 1980.

The ARW work closely with Ireland's Specialist Police Unit, the Garda Emergency Response Unit (ERU). The two taskforces have a history in dealing with the Irish republican paramilitary and terrorist organisations, namely the new 'IRA' dissident groupings. For more information on the Garda ERU, please watch the videoat the end of this article.

The Rangers conduct missions at home under their 'Black Role', and under their 'Green Role' overseas. Although their domestic involvement in Ireland remains secret, they have been officially deployed under the umbrellas of NATO (Partnership for Peace), the United Nations and the European Union. These include 'peacekeeping' engagements in Western Sahara, Somalia, Eritrea, Liberia, Central African Republic, Chad, Lebanon, West Timor (Indonesia) & East Timor ('Timor-Leste'), Cyprus, Croatia, Kosovo and Bosnia-Herzegovina. The ARW are also credited with limited involvement in the Sinai Desert (Egypt & Israel), the Iran-Iraq border and in the DR Congo. Generally their deployments are part of a larger contingent, either from Ireland or international forces.

As of January 2014, the Department of Defence has announced that the Irish Army Ranger Wing is to increase in size by 35% during the year (2014). The ARW has already begun recruiting, and potential candidates will undergo a newly devised, rigorous selection process lasting 34 weeks before training. New equipment and resources is to be provided.