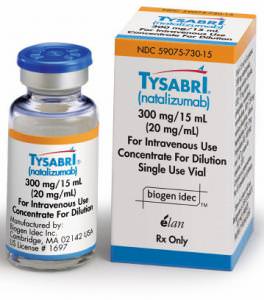 TysabriIt’s all down to the company’s anchor product Tysabri, the blockbuster therapy for multiple sclerosis which is showing strong earning potential as originally promised. Revenue growth in the quarter came to 14 per cent and Élan, uncharacteristically, has asserted that the drug is now on course to deliver global revenue growth of 15 per cent per year over the next three to five years.

Élan reported a patchy initial reaction to the news of its assay test which determines the potency of a drug. This is critical in giving considerable comfort to those testing negative for the *JC virus, the drug’s most potentially dangerous side effect.

US sales powered ahead in the quarter and are now running at an annualised level of $1.6 billion, according to the firm.

An additional 7,500 patients were added during the period. Élan has already confirmed that every 10,000 equates with $100 million to its bottom line.

Data presented to the American Academy of Neurology at its recent annual meeting, supported earlier findings on the JC virus test and also show the drug is even better than previously expected over a longer time frame (four years) in reducing relapses.

Last year Élan was the Irish Stock Exchange’s star performer. If positive feedback persists on the all-important Phase III trials on the bapineuzumab Alzheimer’s therapy it is developing with Johnson & Johnson and Pfizer then both drugs will be the drivers of future revenue growth and all importantly, shareholder return.