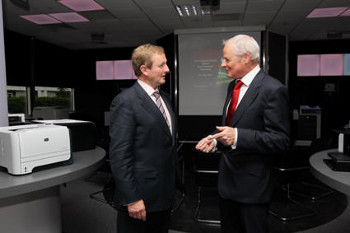 Michael Murphy and An Taoiseach discussing HP in GalwayOne of the worlds leading technology companies HEWLETT PACKARD (HP) has announced plans to develop a new state of the art facility based at its existing site at Ballybrit, Co Galway, Ireland.

HP said that it will be an 87,000 square foot facility with a capacity for up to 700 staff. The new development will be dedicated to software research and development, cloud technology and business services. It is expected that up to 150 construction jobs will be created during the projects creation.

Martin Murphy, managing director of HP Ireland is quoted as saying that the new development was “an exciting and very important development for HP in Ireland.” 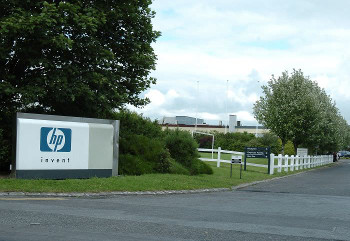 HP GalwayHe added that “this investment in Ballybrit is an endorsement of Galway as a strategic location of choice for HP and affirms the company’s ongoing commitment to its operations in this country.”

The Irish Taoiseach (Prime Minister) Enda Kenny was delighted at the news, saying that the announcement was “a testament to their Galway staff and operations in Ireland.”

With the construction sector in Ireland still on its knees due to the recession, the creation of 150 jobs during the facilities build will provide a welcome boost for this hard hit sector. HP has been a significant business partner to Ireland for many years. This new investment is designed to keep HP and Ireland at the forefront of software research and cloud computing technology.