Earthquakes That Are Man Made?

Earthquakes are occurring in areas where they were once rare. 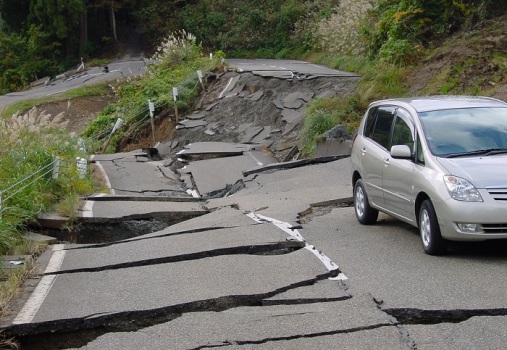 Earthquake damage on a roadway When the topic of earthquakes comes up, the typical American usually thinks of the state of California (although Alaska experiences much more). The famous San Andreas Fault that runs through the state causes about 10,000 earthquakes per year. Most of them are less than 3.0 on the Richter scale and never get noticed. While it baffles many of us here in New York as to how people live in such conditions, it is simply a part of life to Californians. Earthquakes have been a popular topic in the news lately, but some other states have grabbed the headlines that are usually reserved for the Golden State.

Oklahoma is one state that is getting a lot of attention with its recent seismic activity. Between 1975 and 2008, there was an average of 1 to 3 earthquakes per year of magnitude 3.0 or higher. Since then, that number has increased each year. In 2009, there were 20, 100 in 2013, and last year there were 564 such quakes. By comparison, California experienced 207 earthquakes of a magnitude of 3.0 or higher in 2014. It isn’t only Oklahoma that is experiencing a sharp increase in seismic activity. Before 2008, earthquakes were rare in North Texas which has seen over 120 occurrences since, including 9 in a 24 hour period in early January. Nevada, Colorado, Arkansas, Ohio and others have also experienced an increase in earthquake activity.

Areas with consistent seismic activity are near fault lines or cracks in the earth’s surface. There are thousands of faults on the earth’s surface. Some can be as tiny as a hair and others can be hundreds of miles long. These large fault lines usually occur at a boundary between tectonic plates and typically see the most seismic activity. In fact, 90% of the world’s earthquake activity occurs in the ring of fire which surrounds the pacific basin and much of the seismic and volcanic activity there is triggered by the Pacific plate. The San Andreas Fault lies in the ring of fire as it forms a boundary with the Pacific plate and North American plate. Plate boundaries are not the only place where large fault lines exist. The New Madrid fault line lies within the North American plate in the states of Missouri, Arkansas, Tennessee, Kentucky, and Illinois. 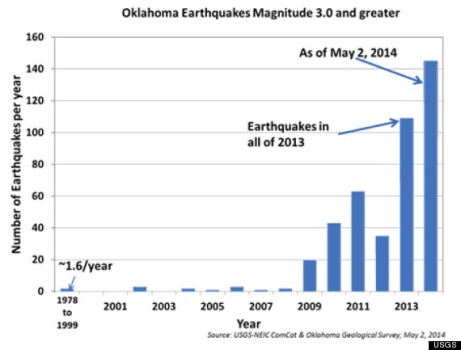 Oklahoma's recent trend in seismic activity There are fault lines that are located in Oklahoma, but historically, these have not been active enough to account for the earthquake activity there. So what is the cause of it? Leading theories link the phenomena to the oil and gas industry. Wastewater injection is a method that disposes of water from the oil and gas industry by injecting it thousands of feet into the ground. These wells are used to prevent waste water from contaminating ground water.

Their role in earthquakes is a recent discovery. As water, sand and chemicals are pumped into the ground; they cause pressure in the well and also reduce friction, causing a fault to slip. Fracking sharply increased in Oklahoma between 2004 and 2008, just before the increase in seismic activity. There are more than 10,000 active wastewater wells and seismic activity has almost always occurred near them. Arkansas, Texas, Ohio, and Colorado also experienced a similar trend, although not as severe as Oklahoma.

Other studies point to drought conditions as a possible culprit. Oklahoma uses water from underground aquifers for irrigation purposes. Drought conditions in recent years have caused a severe depletion of water in these aquifers, resulting in the destabilizing of the fault lines. Sudden heavy rain spread out over hundreds of miles could add significant weight to an unstable fault.

Is the cause from wastewater injection,drought, or from both? Could it be that the faults are just realigning? Geologists are still doing extensive research to determine the exact cause of all these earthquakes because they simply do not know enough about the fault lines in these regions. The oil and gas industry has not given any undeniable proof that the wells are not causing the earthquakes and skeptics see the drought theory as a diversion. Ohio has taken measures on the matter by not allowing wastewater sites near fault lines. Perhaps other preventative measures can be taken because even in well studied areas, earthquakes are unpredictable and who knows when a major one will strike.