A Whale Of A Tale

The World’s Largest Animal is Quite Intriguing.

The Look of a Curious MindOne of my favorite exhibits at the American Museum of Natural History in New York City is the life size replica of the blue whale.  I never forget the first time I saw it because I was completely blown away and that feeling resonates every time I see the massive model.  It has been on display since 1969, measures 94 feet (28.6 m) in length and weighs 21,000 pounds (9525 Kg).  It is a replica of a blue whale found in 1925 off the southern tip of South America and stands as the center piece of Milstein Hall of Ocean Life.  Events have been hosted under it, scouts sleep under it, and you can even get married by it.

The blue whale is truly a remarkable mammal.  They can measure up to 100 feet long (30 meters) and weigh up to 200 tons (181 metric tons).  With these massive dimensions, it’s amazing that these creatures primarily eat krill.  In order to eat, the blue whale dives deep, up to 500m and a single animal can eat up to 4 tons (3.6 metric tons) per day.  They can be found in every ocean on the planet.  During the summer months, they swim to Polar Regions in order to feed and migrate to the equator in the winter.

Blue Whale beside a boatTheir hearts are as big as a car and some of their blood vessels are so large that a person can swim through them.  Most blue whales live 80 or 90 years with the oldest specimen ever found recorded at 100 years old.  Despite the massive size, the blue whale can reach speeds of 20 mph (32 km/h).  Not only are they the largest animals on earth, they are also one of the loudest with their calls reaching 188 decibels (although the frequency they use is too low for humans to hear).  Scientists believe the whales use the calls for communication and sonar navigation purposes. Even though the blue whale is the largest animal to have ever lived on earth, it is a bit of an elusive creature.  It is not every day that you get to see one, and when you do spot one, you tend to take notice. 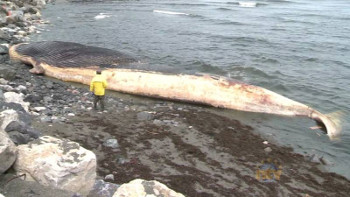 Blue Whale at Trout RiverThe small Newfoundland town of Trout River certainly took notice when an 81 foot carcass of a dead blue whale washed up on their shores.  Nine blue whales were found dead several weeks ago after getting trapped in ice off Newfoundland’s southwest coast.  The whale in Trout River is confirmed to be one of the nine and another washed up in the town of Rocky Harbour.  The town of Trout River has been told they are responsible for the whale but town clerk Emily Butler says they are not adequately equipped to deal with the carcass and need outside help.

A 60 to 80 ton decomposing animal can create quite a stench for residents to deal with.  If that was not enough, the whale is swelling and has created fears that it might explode.  When bacteria decompose organs inside the animal, they create gasses (methane, hydrogen, and sulfur).  If left for too long, these gasses cause the whale to pop open, spewing these gasses and guts.  Towing the carcass is not an option because it might block shipping channels.  Luckily, the Royal Ontario Museum has agreed to help remove the carcasses of both Newfoundland towns in order to preserve and study its remains.

Bodies of dolphins that were trapped by ice on Newfoundland’s coast.To find 9 blue whales dead in sea ice is quite a shock. They are critically endangered and recent estimates range from 15,000 – 30,000 species remaining worldwide.  Excessive hunting diminished the population to about 1000 animals by the mid 1990s.  Over 300,000 blue whales are said to have been killed by whalers trying to harvest whale blubber and oil.  While their population has bounced back due to hunting restrictions, changes in habitat remains a threat to their existence.  Finding whales trapped in ice is not that uncommon to the area.  As sea ice shifts, lanes open up and the animals come to feed on the first shrimp of the season.  Winds can shift the ice and potentially crush the animals, which is what scientists speculate happened to the nine blue whales.

Whales play an important role in the marine ecosystem:  They help maintain populations and maintain a stable food chain; they help offset carbon in the atmosphere, and stimulate the growth of phytoplankton.  While the blue whale has bounced back from extinction, it remains to be seen if they can survive a changing environment.