The Look of a Curious MindMany people in the United States have taken to the art of home brewing in recent years.  I am among many Americans who enjoy brewing their own beer.  Why has this craft exploded in popularity?  From my own experiences, I have never enjoyed drinking the most popular U.S. beer brands and always sought out different tastes.  Eventually I discovered the craft beer scene and quickly realized that beer can be as complex and appreciated like wine is.

Having a background in biology (and a curious mind of course), I wanted to know more about the production of my favorite beverage.  That is when home brewing came into my life.  Drinking beer was not what that drew me in but the science behind the beverage.  It was like doing an at home science fair project.

The reality is, I don’t make beer at all.  My role is to create an ideal environment for the beings that do the heavy lifting: yeast.  Through the process of fermentation, these microorganisms convert sugars into carbon dioxide and alcohol.  Before Anton Von Leeuwenhoek used a compound microscope and discovered yeast, nothing was known of the fermentation process.  Ancient mead makers knew that if honey was left open, something in the air would change it.  In Medieval times, a brewing stick was passed down to generations of ale makers.  In wine regions, people would mash grapes with their feet, transferring yeast in the process.  When brewing, the most important thing is to keep these creatures happy because they are quite particular about their working conditions.  Every piece of equipment must be sanitized and the temperature must be kept just right or else they produce a poor tasting beverage or stop working all together.  There are many different yeast strains that are used in brewing beer.  Some have stricter requirements than others, but each one produces its own unique flavor profile.

Yeast strains are no strangers to the genetically modified food controversy.  Like many food products, scientists are creating strains of yeast that will ferment more effectively, creating less ‘off flavors’ and resulting in a better quality beverage.  Some major brewing companies already use GMO corn, which adds to the controversy.  The Wine industry is also subject to the use of modified yeast.  There is a unique argument over the use of GMO yeast in wine production.  Experts are concerned that these yeast strains could damper the reputation of wine with the possibility of it being viewed as a manufactured beverage.  At the moment, yeast companies have not made the modified strains available due to the potential backlash. 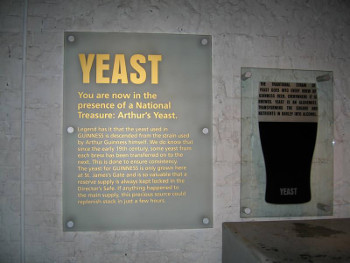 Guinness YeastResearchers in other industries are also making advancements in genetically modified yeast.  In Oakland, Counter Culture Labs and Bio-curious have joined together to create vegan cheese.  That does not sound very groundbreaking until you learn that they used yeast to do it.  The scientists studied milk producing genes in animals, isolated these genes, and cultured yeast to include them.  The result is a milk derived cheese without milk-producing animals.  Before you start gagging, after the milk is produced, it is churned using traditional methods.  Also, it’s lactose free.

Microbiologists at DuPont have a different interest, omega-3 fatty acids.  Fish are the prime source of these fatty acids which are important for cardiovascular health.  Demand for fish oil has outpaced fish populations and the need for alternative sources is necessary.  DuPont researchers have modified yeast to produce these fatty acids.  The potential result could help impact oceans both environmentally and economically.

Anything mentioned that is genetically modified automatically gets a harsh backlash from the start.  Concerns that have arisen include potential allergies to yeast products, possible toxins getting into these toxins, and the potential for disease such as diabetes.  Modified yeast strains have been around for quite some time however.  Insulin for diabetics has been made by yeast for decades.   On the opposite side of the argument, GMO yeast could also have a huge impact on economies and the environment.  There have already been advancements that could have profound effects, with the potential to impact on the fishing and animal husbandry industries in particular.  This microbe with a storied past may have an even brighter future through continued study and advancements.