Simple changes can have a

the look of a curious mindThe Leeds Pond Preserve sits adjacent to Manhasset Bay on Long Island North Shore.  When passing by, it looks very similar to many other places in the area.  Upon looking a little closer, an ecosystem bustling with life appears.  Some of this ecology is quite common to Long Island such as pine trees, sycamore trees, ducks and more.  Other inhabitants are not native to the area at all.  In fact, a large portion of these species are invasive.  Among the residents include English ivy, which originated as a single plant and now reaches every corner of the preserve, Norway maples which have killed off the native maple trees, and even a Ginkgo Biloba tree.

The Manhasset Bay shore line has also been affected by invasive species as evident by the Asian Shore crabs that have taken residence there (Mussels develop harder shells when they detect these crabs).  Even though these species have changed the ecology of the ecosystem, they have developed a new one that is in balance with the other species that currently reside there.  The ecology of an ecosystem changes constantly, whether it is by human interaction, or by natural causes with little impact, but sometimes, changes can have a profound effect on all life.

Typically, invasive species have a negative connotation attached to them.  They are considered harmful to the environment or to human beings.  When introduced to an ecosystem, there are no natural enemies to keep them in balance.  With nothing to hold them back, these invaders take over and can wipe out an ecosystem.  One famous example is gray rabbits in Australia.  In 1959, Thomas Austin released 24 gray rabbits on his property.  By the end of the century, a huge population explosion had caused millions of dollars in damage.  Kudzu, a Japanese plant and also a Leeds Pond resident is known as “the mile a minute vine”.  In the southern United States, it grows at a rate of 150,000 acres per year, covering anything in its path and cutting off sunlight for all other plants.

Sometimes, a species deemed invasive can have positive effects.  The European green crab is a widely despised species.  These crabs have a voracious appetite for clams, oysters, smaller crabs, and just about anything else it can get its claws on.  Researches at Brown University found that they are having a positive effect on an ecosystem in Cape Cod Massachusetts.  Fishing in Cape Cod had removed many natural predators of the purple marsh crab, a native species.  With the opportunity to flourish, they have fed on plants that resided in the salt marshes for decades.  After the introduction of the European green crab, the purple marsh crab population has decreased and the salt marshes are showing signs of recovery.

Many species have felt an impact and have seen their populations dwindle from a variety of causes both human and natural.  Few seem to be as important to human beings as bees.  Most of us see them as little pests that build hives in our homes, cause us to freak, and sting us.  Bees do play a significant role in our lives though.  Approximately one third of the foods we eat rely on them for pollination.  Up to 80% of crops such as cotton, almonds, apples, oranges, and soybeans are pollinated by bees.  So what has been the cause for the sharp decline in their population?  Some have pointed to genetically modified crops and climate change, but it seems as if pesticides are to blame.  Scientists from the University of Maryland and the U.S. Department of Agriculture found that pollen that has been infested with pesticides inhibits the bee’s ability to fight infection by a parasite called Noseme ceranae. Unfortunately, it gets even more complicated than that.  It was also discovered recently that many colonies in the United States and China have been destroyed by a virus that typically affects plants.  Some 10 million hives have been wiped out since 2006 and they continue to be affected. 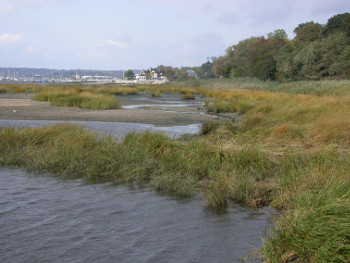 Manhassat BayHuman actions do not always have a negative impact on the environment however.  Technology is currently being used to protect animals that are currently endangered.  GPS is being used to track gorillas and tigers to protect them from poachers and other harm.  The electronics company Hitachi has developed plants that remove salt from water in Abu Dhabi to help save the Arabian Oryx.  Even the Hubble telescope is being tapped to help track whale sharks.

Humans have impacted almost every ecosystem on earth and are responsible for more extinction than the past 8 million years.  Many of us acknowledge the impact we have had while others look away without a care.  Maintaining a balance between organisms is important in an ecosystem.  In some cases, we created a new balance, in others, it is necessary for us to be responsible for that balance.  Saving the Earth does not create the correct image because the Earth will recover from our actions.  The real message is to save ourselves because we are impacting the conditions in which we have thrived.