The case of the disappearing bees

Each spring, the pear farmers of Sichuan province in China get out their ladders and feather dusters to pollinate the trees in their orchards. It’s a painstaking, time-consuming job that should be done by bees but there are no bees in this province. Over-use of pesticides wiped them out years ago.

The problem of the missing bees is not confined to China. Worldwide there is a crisis in bee-keeping, with the bee populations decimated by a puzzling disease known as colony collapse disorder.

We tend to take the honey bee for granted, their pleasing drone a backdrop to summertime. But bees are essential to agriculture and are responsible for the pollination of up to 75 percent of world food crops. So the catastrophic drop in their numbers is a serious worry. In America, bee colonies are decreasing by over a third every year. The cause for the collapse is manifold and not easy to reverse but what is clear is that the problem is man-made.

The story of the decline of the honeybee has its roots in the revolution that occurred in agriculture in the twentieth century. Mixed farming gave way to largescale single-crop units. The wild honeybee numbers declined and a large and lucrative bee-keeping industry developed to fill the gap. 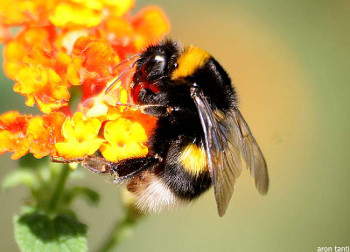 Every year, millions of bee-laden hives are transported across America to service the giant farms on both sides of the continent. This also occurs in Europe and other parts of the world. The bee has become a migrant worker for rent to farmers and, in the view of many, is over-worked, which has interfered with their natural cycle.

The type of bee used is also a factor. In the past, a diverse number of bee species inhabited the hives. Now the bee-keepers tend to stick to one or two varieties which lower the resistance to disease.

The new farming practices and the increased ease of transport meant that bees could be moved between continents but this also led to the exposure to new diseases. The varroa mite, a tick-like parasite is rampant in Asian bees but they have developed a resistance to it. When Western bees were exposed to the mite, however, they died in their millions.

But probably the greatest hazards for bees are pesticides. Certainly the bee crisis in China has been caused by their over-use. Pesticides are all-pervasive in the working bee’s environment The average bee can have up to ten pesticides present in its system and the flowers it feed on can have even more. A new type of super pesticide containing neoncotinoids has been identified as being particularly harmful. Tests have shown that this substance affects the bees’ ability to navigate – to perform the ‘dance of the honeybee’ that allows them to find their way back to the hive over great distances. These pesticides are, unfortunately, the most popular and best-selling in the world and have an influential commercial lobby backing their use. Many countries have now banned or limited their use.

The falling bee numbers may be linked to a combination of all these factors. But whatever the explanation, the task of finding a solution is urgent because many experts believe that the collapse could be more devastating than global warming because of the important role the bee plays in agriculture.

So next time you spread honey on your toast, think of the over-worked bee that produced it and remember those Chinese farmers clambering up ladders to play cupid to their fruit trees.

Rose Comiskey is a freelance editor, writer and photographer. She will be contributing occasional pieces on the environment to Digital Print News