Who’s Afraid Of A GMO?

Engineered food product debate continues in the US.

The look of a curious mindIt was interesting to see a group of protestors gathered together at a busy intersection near a local mall recently.  They were protesting in typical fashion with signs and even went as far as walking up to cars that were stopped at traffic lights to spread their word.  Usually when a mass gathers at a local storefront, more often than not, it is an unhappy union angry over a contract dispute.  A large inflatable rat is usually present to signify that the company they are protesting about is using non union workers during their strike.  I assumed that this group was acting in a similar manner and paid little attention to the mass of people as I started to drive past them.  Curiosity got the best of me and I gave the group a second look.  I was interested to see that they were not striking, but informing people about Genetically Modified Organisms (GMO’s) and displeasure with the Farmer Assurance Provisio.

The Farmer Assurance Protection Act (Called:  The Monsanto Protection Act by detractors) has created fierce debate in Washington since it was first passed into law on March 27, 2013.  Critics of the bill say that it prevents biotech companies such as Monsanto from litigation and gives them the power to grow unsafe crops.  Supporters claim that the provision protects farmers, not biotech companies, from court decisions that force them to destroy crops that were deemed legal by regulatory agencies.  While the bill expired on September 30, 2013, those against it continue to rally in an attempt to persuade lawmakers and keep the bill from being included in future legislation.

Like many issues in American politics, the debates over the potential impact of this legislation can be made to look more complicated than they really are.  Is the issue over companies releasing food products with potentially harmful effects, or simply trying to use a biotech company with a history of making hazardous products as the face of a controversial topic.  The debate over the impact of genetically altered crops however, is pretty complex.  There is fierce controversy over the impact these organisms have.  While there is not enough research done over the potential impact of eating genetically engineered food, little evidence exists over any harmful effects.  Even without proof of damaging consequences, long term impact is still unknown and have led to GMO’s been banned in many countries throughout the European Union, Japan, Thailand, and India.  The United States has largely embraced the technology with only a few states and counties expressing disapproval.

Ask an advocate why they are against engineered food products and you are likely to get a variety of answers.  Arguments against GMO’s include possible health effects, ecological damage from herbicidal resistance genes spreading to natural plants, impact on insects, and possible overuse of herbicides.  All of these are legitimate concerns and need more research and time to determine if the effect is negative.  Among the biggest concerns of those against GMO’s is that biotech companies have too much power.  They say that these companies are not regulated enough and have too much control over what goes into the food supply chain. 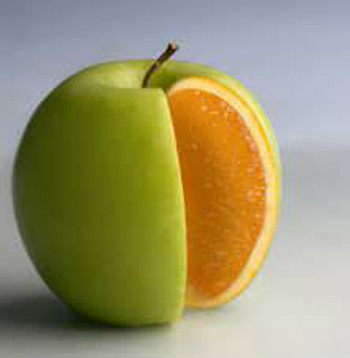 apple-orange-gmoGiven the history of pharmaceutical companies in the United States, abuse by private companies is a legitimate argument.  It is estimated the 60 to 70 per cent of food in U.S. supermarkets contain modified crops of some kind.  The vast majority of these are processed foods whose ingredients come from canola, soy, corn, cotton, sugar beet, and more.  Most produce available is GMO free and currently no meat, fist, or poultry products are approved for direct consumption, though, Salmon may become the first to be approved for human consumption by the FDA (As I read in an article buried on page 28 of my local Sunday newspaper).

With all the issues, debates, and potential problems, there are many possible benefits as well.  Crops that are genetically modified grow faster and can be engineered to withstand conditions that would normally kill natural crops including disease, pests, cold, and drought.  By improving a crops ability to resist natural effects, yields from harvests can improve which will create better efficiency in current farms and potentially create new farmlands in areas where natural crops do not have the ability to grow.  The largest benefit may be the possibility of feeding a growing world population.  Currently, global population is estimated to be approximately 7.1 billion people and that number is expected to surpass 8 billion by 2025, and 9 billion by 2050.  With a growing population, the ability to feed people becomes increasingly difficult.  Engineered food can be a possible solution to this problem and may help address nutrient deficiencies.

The controversy over Genetically Modified Food is a complicated one and will not be settled overnight.  Only time and research will determine whether these products are harmful or beneficial.  Consumers have the right to be wary and should have the power to choose the food they eat, natural or GMO.  They also have the right to be correctly informed of the scientific facts of the issue.  I would like to think that good science and technology will eventually come to a factual conclusion and determine what the true impact of GMO is.

Daniel Steiger is a teacher who lives in Long Island, New York.  He is recently engaged and works at the Science Museum of Long Island, a science activity center that is located on a nature preserve.  Formerly, he worked for the New York City department of education and in the field of renewable energy.