Advances in technology will change the way we get energy

the look of a curious mindIt seems very easy to get accustomed to new technology, sometimes too easy.  The age of information has completely transformed the way we live our lives.  It is not until you look back at years and how life has changed that one can develop an appreciation for it.

I clearly remember what it was like before cell phones (mobiles), tying to meet up with friends on a Saturday night and hoping they were at the location they said they would be.  If they were not, and with no way to contact them, I often wouldn’t know what happened until the next day.  Shopping, dating, music, movies, television, information, and many other things have all been transformed.  Sometimes, I like to look at how the future was envisioned in previous decades.  Visions of odd looking buildings that peered through clouds, time travel, robot maids, and flying cars come to mind.

When you look back at how our energy of the future was viewed, nuclear power reigned supreme.  Since it is the most efficient form of energy in terms of homes powered per unit, it makes sense why people thought it would be the future.  Nuclear power can be very risky and dangerous as seen by the Fukushima Daiichi nuclear disaster in 2011.  While there may come a time when safety issues are ironed out and it becomes the dominant energy source, advances in other forms of energy seem to be the future for now.

Fossil fuels account for approximately 80% of the world’s energy consumption.  Demand has been increasing as China, India, and other countries grow into economic powers which could lead to increasing prices.  Signs also point to their use as a cause for climate change.  With these in mind, it’s no wonder that alternative fuels are all the rage.  They are easily regenerated, they do not pollute, and they are available everywhere in the world.  They, like fossil fuels, are not without their issues too.  They can be costly and are not as efficient as traditional energy methods.  Technological advances may change all that.  As demand for alternative fuels has increased, more research has been done to advance technology.

Of all the forms of renewable energy, solar seems to gather the most interest, as it should, since the sun is our most plentiful resource.  The problem with solar energy has been the high costs of producing solar panels that fall well below the efficiency of fossil fuels.  Solyndra, a manufacturer of solar cells, captured headlines back in 2011 when it declared bankruptcy despite receiving support from the U.S. government.  The company quickly became the symbol of why renewable energy will not work.  Why?  Because of high costs!  According to the U.S. Department of Energy, solar costs an average of $156.90 per megawatt hour while traditional methods cost much less.  These costs, however, are falling as research is done to make solar panels more efficient and less costly.  How is this being done?  Researchers are developing panels that are capable of converting a higher percentage of light into energy.  In addition, great advances have been made in thermal storage making it easier to store energy that can be used when the sun goes down. If technology continues to advance, and demand keeps increasing, then the cost of solar energy will plummet. 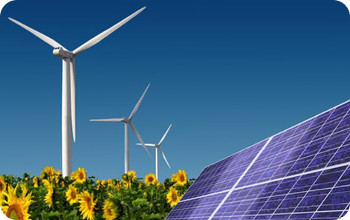 renewable energySolar is not the only sector making advances.  Wind turbines are being made larger with blades that are more efficient, making it possible to capture more wind.  In addition, much research is being done to place these turbines in optimal locations.  Developments have been made in underwater turbines that can use tides to generate power.  Some countries are looking to volcanoes for geothermal energy.  Even carbon dioxide is being developed as a possible fuel source.  The future certainly looks bright for renewable energy, but fossil fuels still account for 82% of the world’s energy.  Oil, natural gas, and coal companies understand the need for cleaner fuels and are making advancements as well.  Cleaner burning of coal has been developed and the possibility of using hydrogen from coal is being researched.  Water free fracking is gaining popularity and could possible reduce the environmental hazards of hydraulic fracking.  Fossil fuel companies are finding ways to adapt to a green world.

While flying cars are not here (and they shouldn’t be as driving on the ground is hazardous enough), there are advances in energy that could not have been fathomed in the past.  As alternative fuels continue to be developed, who knows what will come of it.