A meme I recently saw read, very simply, as follows: 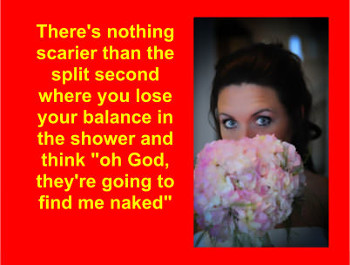 Picture it (if you can bear to do so):  Me, early June, 2011; I was sitting naked on the side of a tub at my mother's Manhasset, Long Island house, rubbing some self-tanner on my freshly depilated and exfoliated, Pillsbury-Doughboy-white legs.  Suddenly, I slipped backwards, cracking my head on the soap dish, my upraised, lotion-slicked legs splayed most unbecomingly.  I saw stars momentarily and feared, for a split second, that I was losing consciousness.  (I probably did.  Then again, I DO tend to exaggerate a bit in telling any tale—even on myself.  Just ask my kids.)  My first thought was, “I am going to have to yell for help from my mommy.”  Mind you, my mother at that time was 85 years old and hardly in any shape to haul my sorry butt out of a deep bathtub.

Moreover, it was quite possible that she would be mightily pissed off upon being summoned, as my accident occurred right in the middle of a new episode of one of her favorite detective shows on TV.  It then occurred to me that Mom would have to call 911, putting me in exactly the same position mentioned in the meme above.  “Thank God,” I thought to myself, “I only weigh 108 pounds.  I won’t give some poor emergency medical technician a hernia when he tries to scoop me up out of this porcelain purgatory.”  My next thought, though, was far from heartening.  Manhasset has an incredibly efficient, all-volunteer team in what is known as the Manhasset-Lakeville Fire Department.  They are the super-swift first responders to any emergency 911 call made by anyone in the area.  I know many of those volunteers, if not by name, then certainly well enough to say hello to on occasion.  Slim as I was at the time, I didn’t relish the thought of anyone I knew—even slightly—seeing my 60 (almost 61) –year-old body sans clothing. 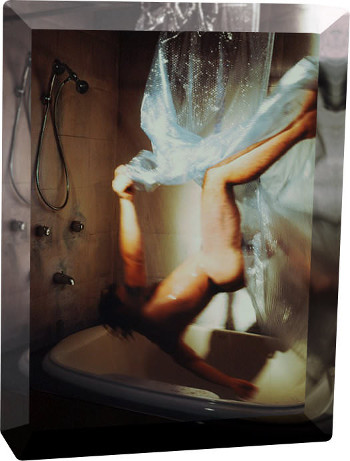 slip in showerI “came to” in a few seconds and managed, if shakily, to rescue myself—or, at least, to stand upright.  I grabbed a plush terrycloth robe from a hook on the back of the bathroom door and wrapped it around myself but, almost immediately, felt a steady drip of something warm and thick running down my neck and back.  Placing my hand at the back of my head, I was horrified to find that it was drenched in blood.  “I’m going to die, but at least I’m not going to die naked,” was my next thought, followed by, “and if I live at least another 12 hours or so, I might even be attractively tanned at my wake.”   It didn’t occur to me (at that time, anyway) that my legs would probably be covered by the bottom half of the casket, or that my face would be slathered with cosmetics applied by a mortician’s heavy hand, and that nobody would appreciate the care I took to beautify myself on the night of my tragic accident.  I did, oddly enough, though, wonder how many people (and who) would actually show up for the viewing hours.

I have to mention that I was heading to Providence, Rhode Island, the day after my accident to visit with two close college friends whom I hadn’t seen in a few years.  The self-tanning was entirely unnecessary, a vain move on my part.  I should have known that my old friends, Sue Vogel Cawley and Libbi Manley Murray, wouldn’t have given a fat rat’s tail if I had arrived for the weekend looking like Casper the Friendly Ghost.  I did make the trip the next day, albeit with a still-oozing bump the size of a watermelon on the back of my head—oh, there I go again, with the hyperbole!—but none the worse for my traumatic experience of the night before.

Awkward moments?  Yeah, they do happen, sometimes just the way a clever meme describes them.  And I’m living proof.  P.S.  I don’t weight 108 pounds anymore.  Good!  (I suppose.)  I have more padding now, just in case I suffer another bathroom fall in the future.  That extra personal avoirdupois (plus the wet suit I now wear when bathing) should spare me from any serious harm and/or potential embarrassment, don’t you agree?