Letter to a mom whose son is being bullied at school. 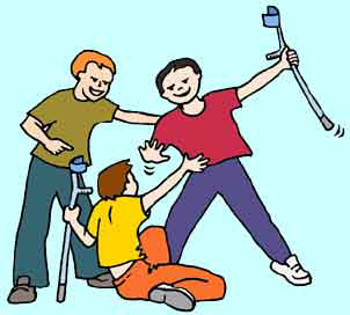 Schoolyard bullies have been around since the existence of the first schoolyard. They are nothing new—indeed, Jesus might have said the same thing about bullies in general that he said about the poor - ” they will always be with you.” That said, the subject of bullying regularly makes the headlines in the U.S., especially when a victim of bullying attempts to commit—or succeeds in committing—suicide as the result of unrelenting torment by his or her peers.

I don’t think you have to worry about this possibility in your son’s case, primarily because you are addressing the issue now, while he, who has been bullied lately, is so young. As you well know, what differentiates the bullying of today from that of yesteryear is, indisputably, the ability of bullies to humiliate their victims in an arena much larger than a local schoolyard. That would be, of course, the Internet, cell phone, and other devices. In years gone by, victims of bullying could escape their tormentors by going off to college as freshmen unknown to a new circle of potential friends, by moving to other towns to start their careers, or by staying put after besting their adversaries, either verbally or physically, never to be bullied again. With the advent of social networking sites, cell phone cameras, and instant messaging, however, a victim’s embarrassment can follow him or her indefinitely.

Bullies come in all flavors and genders. While I was never bullied physically, I did at one time find myself at the mercy of a couple of stereotypical “mean girls,” led by a 12-year-old, horse-faced ninny with the complementary laugh of a braying donkey. I'm here to tell you right now that the pranks she orchestrated against me hurt, and the only advice I was given was to ignore that group. (Skipping ahead here: When I saw her at my 40th high school reunion, she was still a horse-faced ninny whose annoying laugh could be heard throughout the room. I have to admit, I experienced a frisson of delight upon seeing that. I can only hope that age improved her personality, but I wouldn't know because she couldn't get through the circle of friends I was with to get close enough to me for me to acknowledge her presence— graciously, of course. After all, I’m an adult now; well, more or less!)

When my son Drew was in elementary school, he (and everyone else in his third-grade class) was bullied by a physically and verbally abusive, bigger-than-average classmate. Everyone feared this brat and everyone--even his long-suffering teacher, I suspect--was relieved when this kid was out sick or otherwise absent from school. I was called into the school one day to pick up my son, as the nurse thought that the bully had broken Drew's leg when he pounced on Drew for no particular reason while the class was at recess. Drew's leg was not broken, but he was forced to use crutches for a couple of days. The bully was suspended from school for three days, as the entire incident had been witnessed by a playground aide. At some point during the day after the incident, while the bully was at home (perhaps reflecting on his transgressions but more likely watching TV, eating Cheetos and Ding-Dongs, and planning his next attack on some unsuspecting kid) Drew raised his hand and asked his teacher if he could address the class. He told them that no HAPPY person hurts another person on purpose. He then encouraged the class to be extra nice to the bully when he returned to school. Without saying it in so many words, Drew urged them to "kill him with kindness." Drew’s teacher called me that afternoon to say that it was the most extraordinary thing she had ever witnessed. (I kid you not.) The bully ended up at our house for play dates several times after that and, from what I know of him today, he has turned out just fine. Sometimes kids have to do their own thing to correct a situation, but encouraging words and coaching from parents will always help them to make the right decision when threatened. (Now I hope Drew will forgive me for boasting about his ultra-good nature to you!)

No matter what schools do to try to stop bullying, bullies will always rear their ugly heads. The good news is that most of them get their comeuppance eventually. It’s up to parents (and, to a certain extent, to schoolteachers) to instruct children in the art of disarming or otherwise standing up to a bully.   We both know that your son is a great kid. One day, he will have close friendships--REAL friendships--to cherish forever. He's not too young to learn one simple response to the bully who mocks him now. Do some role-playing with him. Have him practice looking you, “the name-calling bully,” in the eye, and repeating (with a hint of a smile), "Did calling me ‘X’ make you feel better?" Of course, such a response doesn't work on everyone, but a show of confidence will often flummox a bully. The more your son practices actingwith confidence, the more quickly he will internalize genuine confidence. Remind him that bullies are often themselves the victims of bullying at home or elsewhere, and that young Drew O’Donnell was correct when he said back in 1985 that happy people don’t bully others. They just don’t.

Naturally, you should inform your son’s teacher that he is being bullied at school, but explain to him or her the instruction you are giving your child at home; do ask her to reinforce that instruction with him and to keep you updated. Most children your son’s age don’t have their own pages on social media sites, which is a good thing at this point in his life. As he grows in confidence and the bullying abates, he’ll be able to handle himself, both online and off, if or when any bully rises up against him in the future.

Is mine the only advice you should take into consideration as you struggle with this issue? Absolutely not. But I’ve seen confidence-building exercises work to the benefit of other kids and pray that yours will benefit by them, too. Give it a try and let me know what happens.

Wishing you the best!