O'Donnell Irish EyesOh, the lengths to which women will go to enhance their natural beauty! Tell ten women that the latest and greatest wrinkle-reducing/pore-minimizing/elasticity-rejuvenating skin-care regimen consists of a weekly application of a mixture of olive oil, toothpaste, and oatmeal, massaged gently into facial skin, left to dry, then rinsed off with a pomegranate margarita, and you can be sure that at least one of them will try it.  (The other nine will drink the margarita, or even two, while thinking about giving themselves that facial.)  Over the centuries, women have tried just about everything under the sun (including but not limited to bird poop, human placental tissue, moistened clay, whale blubber, and blood) in an effort to improve their looks. They have also made use of substances found in any well-stocked kitchen:  Mayonnaise is best “ironed” into the skin with the back of a heated teaspoon; cucumber slices or chilled wet teabags placed on closed eyes reduce puffiness; an oatmeal paste exfoliates nicely when used as a facial scrub or, if using it as a mask, apparently rinses off to reveal a glowing complexion. Mass-produced chemical concoctions, found in places as diverse as dollar stores and upscale salons, are relatively new. Manufacturers market these products enthusiastically in print ads, 30-second advertisements, and 30-minute “infomercials” on radio and television, and promise the users of their formulas miraculous results.  Make no mistake about it:  Their marketing strategies work. In 2005, Americans spent $7 billion – yes, you read that correctly – on skin-care products, and that figure doesn’t reflect the amount spent on home-remedy skin-care solutions, cosmetics, perfumes, and dermatologic or surgical procedures.  According to analysts at Goldman-Sachs, who arrived at that number in 2006, the amount spent globally on skin-care remedies came to $24 billion.  That’s a lot of bread, no matter how you slice it.

The positive effects of potions and lotions are not permanent, of course. Treatments with longer-lasting benefits, such as collagen and Botox injections, chemical peels, dermabrasion, and the like, gained popularity in the U.S. and elsewhere long before the economic downturn of 2008.  Among women whose wallets were negatively affected at that time, there were some in my own circle of acquaintances who had already begun such therapies and who were not about to give them up, even temporarily. One way or another, they would make room in their budgets for skin maintenance. One gal, a friend of a friend, had to choose between replacing her dead clothes dryer and re-upping for a new series of Botox injections and other procedures. Need I tell you what she chose to do? I have not seen her since I moved from Georgia to New York in 2011, so I don’t know for sure whether or not she has replaced that machine by now.  I am told, however, by an always reliable source that our mutual friend still has a face as smooth (and as expressionless) as a brand-new container of Silly Putty, while I am developing a frighteningly close resemblance to a Shar-Pei puppy, minus its whiskers. 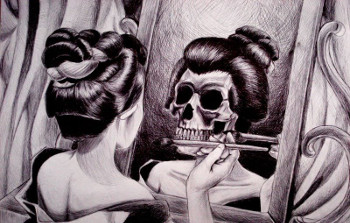 Prior to 2008, I had begun to hear women extol the myriad benefits of tattooed eyeliner and lip color. Indeed, I spotted such a tatted lady while on a 6:30 a.m. emergency run to the supermarket. I couldn’t help but notice her plumped-out, plum-colored lips as she pursed them while studiously examining expiration dates on the milk cartons.  Her eyelids were precisely (but not heavily) lined in the darkest of browns. Without another bit of makeup visible on her face at all, she still looked great.  I can’t say that I (sans makeup, in the wrinkled cotton shorts and tee shirt I had thrown on for this  errand, and exhausted after having tried unsuccessfully to tame a case of malignant bed head before running out of the house) wasn’t a wee bit envious.  Keeping jealousy in check proved to be easier than I expected, though.  With smug satisfaction, I reminded myself that lips the color of a ripe plum are not to be found in nature. I then convinced myself that the shade she chose for her lips would be outdated with the next change of season but, because hers was tattooed lip color, it was destined to remain until she shed layer upon layer of skin. Those of us without the tattooed lips, on the other hand, needed only to walk into the nearest store, buy a new lipstick, and then remember to apply it every once in a while.  Hah-hah!  Take that, ugly green monster; be gone!

I have never, even for a second, been tempted to have a tattoo of any description at any time in my life. I have never even explored the possibility of being injected with a skin “plumper” or wrinkle “filler,” although I probably should. I have tried various skin-care products and cosmetics over the years with both good and bad results. One comically disastrous result of a DIY hair-coloring experiment inspired my ever-industrious youngest child to charge his friends a 25-cent admission fee to our house so that they could get a look at me.  Have you ever been snookered into buying a cosmetic or lotion which you later regretted purchasing?  Have you ever had an unexpected outcome after undergoing a minor cosmetic procedure?  If so, what have you learned from that experience?