The Words You Love To Hate.

If there is one word in the English language that makes my old college buddy, Ruth Hennigan Gerrity, and my mother, Noreen Rooney Sheridan, cringe, it is “snot.”  In my mom’s case, it isn’t that the meaning of the word conjures up memories of her mopping up the endlessly running noses of her six children when we were too young to do it for ourselves.  In Mom’s youth, the now-commonplace “snot” was considered too crude for any well-bred young lady to utter.  For a woman in the ninth decade of her life, Mom easily goes with the evolutionary flow of idiomatic English; however, on the subject of this one word, she’ll likely never change her opinion.

In my mother’s presence, all who know her well substitute “mucus” for “snot,” but that would never do if they were joined by Jodie Kucich Shirley, who has pronounced this seemingly benign alternative taboo.  Almost as repulsive to my mother as the word for that “stuff that drips from nasal cavities” are the phrases “shut up” and “I’m booooored.”  Hearing either of these was enough to drive her to rummage in the kitchen’s utensil drawer for her choice of disciplinary tool.  I wonder if Eleanor Fetch also pulled out a wooden spoon when she overheard her kids harshly warn others to hush, because “shut up” ranks way up on Eleanor’s list of verboten admonitions, too.

In recent days, I have discovered that many (if not most) people maintain unwritten lists of shudder-worthy words and phrases.  For reasons unknown to me, the word “moist” is offensive to a host of folks—women, mostly.  How does a woman with this aversion describe the soil of a perfectly watered African violet?  The tip of Fido’s nose?  The texture of her freshly bathed, towel-dried newborn baby’s skin?  Is the word “moist” so repugnant that she would rather describe the aforementioned as “not too wet, not too dry” each and every time “moist” would serve more than adequately?

Jill Tasco Easton and I share a dislike of the new-fangled expression, “we’re pregnant!”  I‘m not sure when this started (and why it became so popular is beyond my comprehension), but I have always believed that the only physiologic “we” in a confirmed pregnancy consists of mama and baby.  I’m perfectly comfortable with a couple’s delighted announcement, “we are expecting” but, until men can fully experience the thrills and chills of childbirth, the mother-to-be’s declaration, “I am pregnant,” is the only one that rings true to my ear.

“I could care less” jars the slats of several of my friends, including Anne-Marie Cottone, Barbara Babowal, and Melody Learned, but Philip O’Neill, who figuratively foams at the mouth when he hears it, defends his position well.  “No, no, no, NO!  ‘I could care less’ means there is a level of care to which you could still drop!  If you are trying to demonstrate how little you care about something, the correct phraseology is ‘I couldn’t care less.’”

I have yet to meet a man more candid than Michael Zerner, whose pet peeve is the phrase, “to tell you the truth.”  He never hears it without tuning out much of what follows that conversational preface; he is far too busy wondering why the speaker needs to clarify his or her own trustworthiness.

Bernie Suchy, Kathleen Ruddy, and Gene Tullio loathe the dismissive “whatever,” generally mumbled by those who “could care less” about anyone or anything.  I’m with them on that score.  Even worse is the shortened form adopted by a lazy and apathetic subset:  “Whatev!” 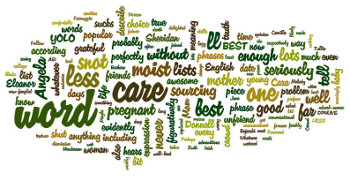 Please tell me:  What’s wrong with a simple “thank you” these days?  Lately, “you’re the best!” has taken its place.  “You’re the best!” has even trickled down to the toddler-aged population.  After helping my then-three-year-old grandchild in the bathroom, she looked up at me in grateful appreciation:  “You’re the BEST!”  The best at what? I asked myself.  Wiping a behind? Maybe I’ll have this inscribed on my tombstone:  Name, date of birth, date of death, and “The BEST bottom wiper in the universe.”

Similarly, “you’re welcome” has been largely replaced with “no problem,” according to Arlene Scott O’Donnell, Marianne Otremba, and Maureen Conway McCartin, all of whom despise it. “It’s nothing” and even the dreaded “whatever” are employed almost as often.  Ugh.

Topping the lists of Julie Rondeau and Karen Ranger is the expression “it is what it is.”  That one is so overused by now that it has lost any of its original suggestion that those who do use it are profoundly philosophical in their worldview.  More fatalistic is Nirmal Gerow’s list-topper: "It’s reality." Oh, really? In the same vein, Nicholas Graziose’s least-favorite phrase, “it’s all good,” has also become void of meaning, a phenomenon that truly “sucks.”  Sucks:  You guessed it.  That word made some lists, too. Sara Bojarski is representative of those who have had enough of it.

Jason Morhaus is growing weary of hearing and seeing “YOLO” every time he blinks.  While it is true that “you only live once,” the average life is long enough that one can pick up a good vocabulary along the way.  That education should include learning the difference between “literally” and “figuratively,” according to Camilla Lightfoot and Bob Clancy, and dropping the word “irregardless” altogether, writes Lauren Devlin Boylan.  Surely a few synonyms for “awesome” aren’t that difficult to find, says Judith Good Taylor.

The adverb-averse Jane Kahan, Joan Farruggio Chicchetti, and Mary Ann Dougherty, can do without “actually,” “seriously,” and “evidently,” respectively.  OK.  I’ll cut back.

It is probably apparent to you by now that I did quite a bit of crowd sourcing in preparing this piece, only to discover that Angela Henderson’s list evidently contains the term “crowd sourcing.”  Whatever.  That seriously sucks for you, Angela, because it is what it is.  Crowd sourcing is the awesome wave of the future. Enlisting the help of friends enables a writer like me to string lots and lots and lots of words (including the word “moist”) together without doing much thinking. Actually, I could seriously care less about your response and, to tell you the truth, if I hadn’t known you since you were a snot-nosed kid, I’d probably unfriend you.  Wait!  Perhaps that’s going a bit too far.  I should be grateful that you contributed anything at all.  You’re the best!  So you’re stuck with me forever, Angela, or at least until I hear you and your husband say, “We’re pregnant.”  Then—no problem!—I’ll have no choice but to unfriend you, because that would be the proper thing to do.  After all, YOLO.  And y’know what?  It’s all good.

Cara can’t contribute her usual weekly article this week so we thought it might be nice to re- run her most popular piece so far which has received over 13,000 hits on DPNlive