my promise to my children

O'Donnell Irish EyesThe sentiment above (origin unknown) has popped up on various social networking sites innumerable times in the last couple of years.  In general, I agree with it.  What strikes me with the most intensity, however, is the last line:  “If you don’t mutter under your breath, ‘I hate you’ at least once in your life, I am not doing my job properly.”

Hoo-boy!  Most parents will never forget hearing those words for the first time.  They hit the recipient like a knife dipped in poison, stuck into that parent’s gullet, and then twisted with a strength and ferocity which he or she never before could have believed that child possessed! I say this with first-hand experience.  Having had four children, the “I hate you” line is something I heard from each of them at least once.  Some parents hear it early on.  When spoken at the age of four or so, it is associated with a child’s nascent understanding of emotions.  The four-year-old boy or girl “loves” ice cream (or Tonka toys, American Girl dolls, Max and Ruby cartoon shows, etc.) and “hates” red cabbage (or black jelly beans, picking toys up from the floor, having a shampoo, or bedtime).  They express these two emotions with equal fervor whether applying them to inanimate objects, activities, or (unfortunately) other individuals.  You see, they really don’t understand the complexities of either love or hatred.  So, while the first time we hear the words “I love you” from a child, we melt with love ourselves, we do have to remind ourselves that their love is simple, unencumbered by responsibility.  Similarly, when we hear “I hate you,” we react negatively, forgetting in that moment that the child’s understanding of hatred is rudimentary, too.  All parents, though – and all mothers, in particular – do not seem to react to that first “I hate you” in the same way most do.  My dear friend Judy recently reminded me that when her young son, denied something he wanted, declared quite audibly and furiously that he hated her, she had to struggle to keep a straight face.  In her most dignified and ladylike Southern accent, she responded, “Well, then, let’s go to Wal-Mart and get you a new mama!”  Her son, at first visibly startled, then looked at her in horror and squealed, “Nooooooo!”

It’s the “I hate you” murmured by teenagers (and usually accompanied by a dramatic roll of the eyes) that might be cause for a bit more concern because, presumably, teenagers possess a deeper understanding of what love and hate entail.  Well, at least one would hope that they do.  On second thought, perhaps they do not.  After all, most teens are notorious for falling in and out of love faster than they can text their plans for the evening to a friend.  Such fickleness would indicate an incomplete development of either emotion.  That said, a parent’s response to a teenager’s declaration of hatred would be far different from the response he or she would make to a preschooler.  I can’t say that I ever heard any of my four children say that they hated me as teenagers.  But perhaps I have a selective memory.  Surely at least one of them did so, but I was probably too busy listening to a younger child gagging on red cabbage to have heard the older one. 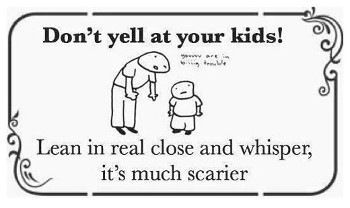 WHATEVER (as teenagers still say occasionally), most of us parents of adult children who survived such episodes have kids who turned out just fine.  Oh, sure:  Some of them will still say they love ice cream and hate black jelly beans, but when it comes to loving other people, they fully appreciate the real deal.