O'Donnell Irish EyesMy mom was born with the heart of a teacher.  Little wonder:  When her own grandmother was in her late teens, she was the teacher in a one-room schoolhouse in upstate New York.  My great-grandmother, who lived with my mother until Mom was about five years of age, no doubt nurtured in her young granddaughter the gift which God had already bestowed upon her.  When Mom became a mother herself, eventually giving birth to the six of us, she was never one to let a “teachable moment” slip away from her.  She was particularly interested in imparting her knowledge of American history to me, my siblings, and, to this day, to her 17 grandchildren and two great-granddaughters.  In touring “living” museums such as Colonial Williamsburg in Virginia or Plimoth Plantation in Plymouth, Massachusetts – or even such museums as the much smaller Old Bethpage Village here on Long Island, in New York – Mom ignored no opportunity to share facts sure to fascinate other museum visitors of all ages.  During a visit to Old Bethpage, which is the faithful reconstruction of a typical Long Island village in pre-Civil-War days, we once stood in the children’s bedroom in a historic family residence. With varying degrees of interest, each of us examined the contents of the room.  Suddenly, Mom asked the grandchildren who accompanied her to name something which modern mothers and children take for granted but which the Long Island mother and children who lived in this house when it was brand new could not even imagine.

“Television!” shouted one of my kids.  “Coca-Cola!” squealed my niece (who had been sorely disappointed during the lunch break to learn that the only soft drink available in the museum’s “tavern” was a bubbly beverage known as ginger beer).  A nephew offered his response:  “Cars!” By this time, other visitors seemed to be pondering the question, too.  A pint-sized stranger in the room with us called out in a hesitant, high-pitched lisp:  “Toileth?”

Mom encouraged all of the children with a hearty, “Good answers!”  She then continued, “How about the medicines your mommy gives you when you have an ear infection or a sore throat?”

“How ‘bout ath-ma?  I have ath-ma and my mommy thquirth a ‘haler in my mouf when I can’t breave!”  (Despite her mother’s prompting, the little stranger wasn’t about to abandon our merry band.) 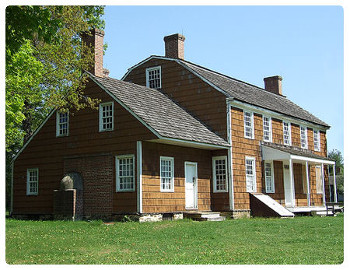 old bethpage village restoration“Great question!” Mom nodded in the child’s direction and motioned for her to move closer.  “Do you think that back when this village was new, the mommies had inhalers to give to children who had asthma?  Do you think mommies back then had the same medicines we use today?”  She was now on a roll and for the next few minutes, children (and quite a few adults) in a room about the size of a walk-in closet listened while my mother delivered a short but classroom-worthy lecture about the development of antibiotics in the 20th Century.  She further explained why some illnesses in 1850 were always life-threatening and often fatal but are now easily cured.  Weaving into her lesson a few easily understood examples of common childhood diseases, she piqued the interest of children and adults alike.  By the time we were ready to move on to the next room, Mom had a following considerably more numerous than it had been upon our arrival.

I was recently reminded of this particular daytrip to Old Bethpage – one of dozens made over the years – when a young cousin posted wonderful news on her Facebook page.  In her status update, my cousin announced that her daughter, who was diagnosed with leukemia a few years ago, at the age of nine, had just returned from her oncologist’s office, where she had received a clean bill of health.  Furthermore, the doctor announced, much to their delight, that they would not need to schedule another follow-up appointment for four to six whole months!  Naturally, while we are all thrilled, my cousin, as a mother, is ecstatic.  Medicine has come a long way in the last 75-100 years, for sure.  What you must understand, though, is that my cousin – or, more specifically (and in the parlance of her passion) my second cousin, once removed – is a genealogist.  Having pored over thousands of documents in the course of her work, she has debunked (but also verified) several long-embraced and oft-shared family anecdotes dating back more than 100 years.  In the course of her research, she has read hundreds of birth and death certificates.  On how many of the latter, I wonder, has she seen listed a cause of death that would be unimaginable to us today?

My hope for this New Year is that in decades to come, future genealogists and lovers of history – people like my cousin and mom – will look at death certificates issued in the early 21st Century and wonder what life was like when people succumbed to cancer, malaria, complications of HIV, and systemic infections.  Perhaps at some reconstruction of a typical 21st-Century American town, a school-aged visitor to that living museum will lecture to her own attentive audience: