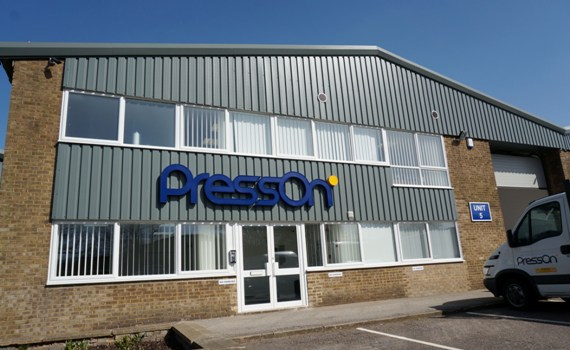 UK based PressOn; the large format digital printers established by Andy Wilson and Nigel Webster in 2000, has moved to larger new premises in Chatham, Kent. The move was made, said the company, following the rapid growth and expansion of the business in the past three years.

Since 2011 PressOn has invested over £900,000 in upgrading the business, resulting in a 37 per cent increase in turnover since then. Investment has included the purchase of the World’s first HP LX3000, Europe’s first HP LX360, an EFi VUTEK QS2 Pro, a Kongsberg iXP24 digital cutting table, a Supracoater liquid laminator and most recently a Solent TexSewPro for automated stitching.

The new modern facility offers a much larger area of usable space for print and finishing equipment and storage, totalling over 10,000 sq. ft. The space has enabled joint founding MD’s Andy Wilson and Nigel Webster to realise a vision of working with what they term as a ‘logical and linear production process’. This has enabled PressOn to speed up print production and finishing times and hence increase capacity. 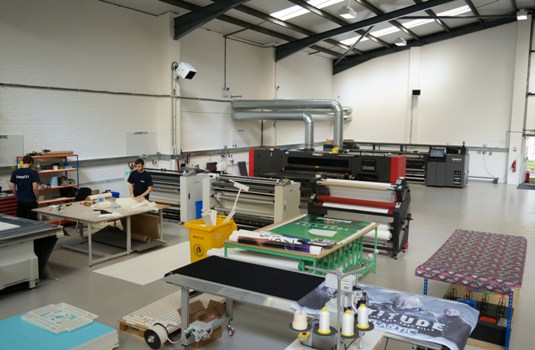 PressOn interior of print and finishing area Andy Wilson said, “We’d just outgrown the site in Rochester and were getting frustrated. The new site is a vast airy space and a great environment to work in. We’ve already seen improved efficiencies through streamlining. We’re also raising the bar on technical excellence, by giving the team time to push the machinery we have to its limits. We’re testing constantly and experimenting so we can offer our customers innovative print. That’s a key focus for us for 2015.”

Nigel Webster added,” One of the unexpected changes we’ve seen in the new premises is the effect on the morale of the team. Previously we were all in separate offices and buildings so sometimes things got disjointed. Bringing everyone together in the one space has been great - improved communication and problem solving from the team was obvious within days of moving.”