Surprise, surprise, we didn’t start them! 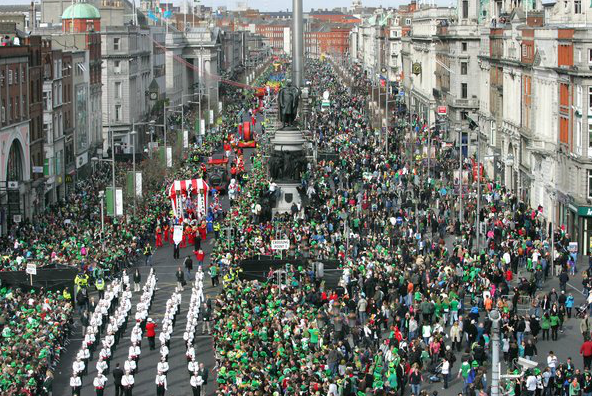 St Patricks Day ParadeIt might come as a surprise to many Irish people, but the origins of parades on Saint Patrick's Day (Irish: Lá Fhéile Pádraig, "the Day of the Festival of Patrick") are not originally Irish, they are, like many things, an American invention. They started life as manifestations of WASP (White Anglo-Saxon Protestant) culture, unlike what everybody thought they were, a celebration of ethnic and religious inclusiveness.

A papal decision (in the mid-17th century) established March 17th as the Feast of Patrick, the day he arrived in Ireland. He is Ireland's patron saint and is venerated on this day. It is observed by the Catholic Church, the Anglican Communion (especially the Church of Ireland), the Eastern Orthodox Church and Lutheran Church. The day commemorates Saint Patrick and the arrival of Christianity in Ireland, as well as celebrating the heritage and culture of the Irish in general. Celebrations generally involve public parades and festivals, céilithe, and the wearing of green attire or shamrocks. Christians also attend church services, and the Lenten restrictions on eating and drinking alcohol are lifted for the day, which has encouraged and propagated the holiday's tradition of alcohol consumption.

But real popularity only set in during the 18th century. And while Saint Patrick's Day was celebrated in traditional fashion in Ireland, outside the country, Irish emigrants took a more outgoing approach.

The first parade on Saint Patrick's Day was organized in 1737 by the "Charitable Society of Boston" followed by New York in 1766. However, make no mistake - these were parades under the control of Colonial WASPdom. The organizers were certainly white and Protestant, most of them also conscious of their Anglo-Saxon (cultural) heritage. And most importantly, these parades were events for the British community, celebrating their Irish roots. British soldiers raised in Ireland, paraded, and the health of the king was toasted. These were a far cry from later parades - and a sign of the times when 75 per cent of the Irish living in America at the time were Protestants.

It was only during the 19th century when mass immigration of Irish Catholics to the US changed the structure of the community. Remember, these were people driven from their native land by hunger and social disadvantages. However, these new immigrants tended to be regarded as ranking just barely above Native Americans and Black slaves. They were "considered" to be drunkards, ruffians, layabouts, unable to speak English, uneducated, without discipline or any other redeeming factors.

In an effort to redress and respond to these prejudices the "Ancient Order of Hibernians" (AOH) was founded in New York in 1836 - mainly by Ulstermen. They wanted the parades on Saint Patrick's Day to send out an internal as well as an external message. The first was aimed at the Irish-American community. Simply put, it wanted to show them the possibility of becoming and recognized as a respected group, a force to be reckoned with. The external message was designed to show the world that the Irish-American community could organize, stay sober and conduct serious business. Both messages combined created what we today know as "the Irish vote".

It’s now a fact that ever since the AOH redefined the parades into demonstrations of true Irish identity and pride they became popular all over the United States. These days, New York and Boston are traditionally the best-known. But even places like Savannah in Georgia celebrated Saint Patrick's Day as early as 1824! During the 19th century US-style parades became popular in Argentina, Australia, Canada, New Zealand and South Africa. It seems that anywhere where Irish communities were established, by choice or deportations have taken to the spirit of St Patrick’s Day celebrations. An example of this is the Caribbean island of Montserrat which declared Saint Patrick's Day a national holiday, a reflection of the large number of Irish exiles settling there.

So fast forward to Ireland in the mid seventies! In 1975 the development came full circle - US-style parades were for the first time ever organized in Ireland. Today they are in integral part of the Irish festival scene, although most locals and visitors do not realize, that this "tradition" is less than 40 years old in most places!

So on the 17 March this year when you’re out watching a St Patrick’s parade, ponder on the history behind it.