many new features for ease of use. 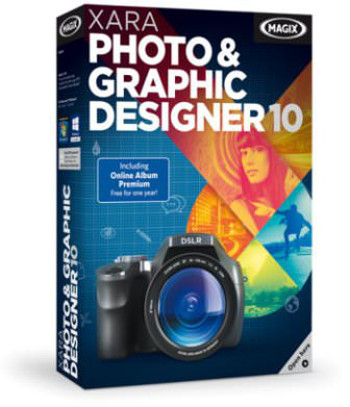 PHOTO & GRAPHIC DESIGNER 10Xara has announced details regarding the release of the latest new version of its creative design software, Xara Photo and Graphic Designer v10. The program is billed as providing all the tools for a range of graphic design and photo editing tasks which is suitable for any graphics enthusiast, small company or academic user.

There is new shadow and highlight tools to provide the user with precise editing control over specific areas of their photo that are in deep shadow or bright light. Bundled with this release is a new Photoshop plug-in called PhotoLooks from Red Giant for users wishing to intensify the atmosphere of their photo via various colour and lighting effects. It also allows them to add a popular film look from soft lighting to Hollywood drama. The plug-in includes over 100 pre-sets inspired by real commercial projects, from wedding vignettes to popular cinematic looks.

Included in the new release is a new way to ‘enhance by colour’ which provides a way to selectively enhance or process areas in an image based on its colour. Xara explained that for example, users can just click on the sky, and all similar blue areas are now active, and further adjustment of any photo enhance control (e.g. brightness levels, saturation, blur/sharpen, tinting, re-colouring etc) will now apply to all those blue areas.

The software has Xara SmartShapes, a new and innovative way to draw aesthetically attractive shapes on a document without the user requiring any knowledge of any drawing tools, and furthermore, they remain fully customisable. The library of SmartShapes will grow over time, but starts with text panels, speech bubbles, arrows and more. Xara has also introduced a quick and easy way to insert graphical symbols from a large and growing Font Awesome selection.

Another improvement has been made to the automatic panorama stitching which can now automatically detect the position of stitched images and it also produces higher quality results. This release also includes a new online content catalogue, support for the automatic rotation of images from iPhones and other cameras with orientation sensors, a new insert menu, improved import/export support for .doc and .docx files, RTF files, and improved PDF import that allows almost all PDF files to be edited.

Charles Moir, Founder and Managing Director said, "Photo & Graphic Designer is different and superior to standard photo editors because it's not only a great photo editing tool but it’s also combined with powerful vector graphics and illustration tools."

It operates on Windows XP/Vista/7/8/8.1 (PhotoLooks 2, XP not officially supported).

For more information and a trial version visit xara.com