A short snapshot on the Congolese Agriculture

From the early 1990s, the agricultural sector of the Democratic Republic of the Congo went through a pretty long period of decline that can be explained by many endogenous factors, mainly political, economic and social internal tensions expressed during the Sovereign National Conference, the 1991 and 1993 lootings and the 1996 and 1998 unrests which actually deepened the crisis to an alarming level. 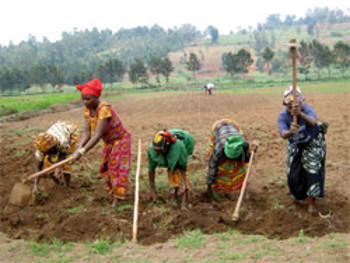 congo-farmingFor any keen observer, it is clearly obvious that agriculture is the basis of the Congolese economy. Its share of the national income reached up to 50% in the 1990s, partly because of the collapse of other productive sectors of the economy (mining in particular). However, since a relative restoration of peace in 2002, this share has gradually declined. But agriculture still provided 40.3% of GDP (against 13% for the mining sector) and employed three quarters of the workforce in 2006.

More than half of the DRC's land is arable and suitable for farming, with 4 million ha of irrigable land. Specialists say that, based on intensive agriculture, the potential is huge. Unfortunately, the land is largely underused. It could feed 2 billion people. It is estimated that currently, the sector is growing at two per cent per year, but this is slower than the increase in population (2.98% in 2005).  Only 1 - 2 percent of the nation's farmable territory has so far been under cultivation at any one time.

The agricultural sector also offers tremendous opportunities for expansion. Almost any type of farming method can be practiced there for a diversified production, considering the agro-climatic diversity, abundance and regular rainfall, and the presence of surface water in large quantities. This explains why, when it comes to poverty reduction and socio-economic development in the DRC, it is recognised that the agricultural sector is probably the most important.

Statistics show that the sector plays an important role in production, with almost 70% of the national workforce and 36% of GDP on average over 2007-2010, 55% in 2010 against 40% in 1960.  Agricultural productivity was reduced by 60% between 1960 and 2006 and the vast majority of farms are mostly small subsistence units.  As result, one can notice the deep dependency on imports of staple food commodities and 55% household expenditure of food (2008).

There is no doubt that the agriculture sector in DRC can be a crucial engine in the effort made by the country’s government and partners to tackle food insecurity and even malnutrition which are at the origin of poverty, diseases and lack of productivity in the vast majority of the population. Moreover, throughout the whole sector, important measures can be taken to significantly bring down greenhouse gas emissions caused by intensive and extensive commercial agriculture and the level of travelling and subsistence farming on burnt land.

The DRC’s forests could provide a potential source of up to US$900 million in annual revenue up to 2030 through REDD+. The UNEP’s Post-Conflict Environmental Assessment of the DRC, released in October 2011, underlines the extraordinary potential of the country’s forestry resources and other natural endowments.  Such potential REDD+ revenue could further enhance the DRC’s transition to a Green Economy. 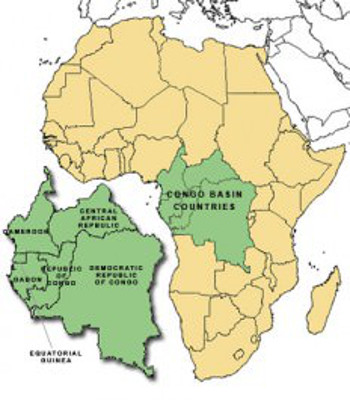 The DRC’s unique and unparalleled agricultural potential and land area in Africa can be better appreciated through looking at some objective natural features. In fact, there is a rainfall of 1000 mm/year. The pedo-climatic conditions are characterised by an equatorial climate in the basin; a tropical climate at the periphery, with alternating seasons on both sides of the Equateur line; and a temperate climate in the East highlands, which offers opportunities for very different cultures. The country has a major river network that ensures the transport of production and supply of different products.  In addition, one hundred twenty five million ha of tropical forests work as a reserve of biodiversity, developable lands for agriculture, timber and non-timber forest products (NTFPs).

Since the country is vast, the average annual temperature varies according to the situation. Thus, it is 25°C at the coast; 24 to 25°C in the northern DRC, the Central Basin, northern Katanga, Kasai, Kinshasa and Bas - Congo; 10°C in the mountainous provinces of the East; and 20°C in the highlands of Katanga.  The seasonal diurnal amplitude is high at low latitudes: it varies between 9° and 11°C during the wet season; in the dry season, the gap is even larger than the cloud cover and relative humidity is lower; it reaches 16°C in the extreme north-east and 18° to 19°C in southern Katanga.  This variety of averages can be used for an effective crop diversification.

Even back in the 1950s, it was well known that the basin of the Congo provided climate conditions that are suitable for growing oil palm, rubber, coffee, cocoa, banana and cassava, while the savanna areas are suitable for growing cotton, cereals, oil plants and livestock, and mountainous areas with a relatively temperate climate lend themselves to the cultivation of altitude crops such as coffee, tea, potatoes, and more livestock.  In fact, the vast tracts available for grazing could help to raise over 40 million head of cattle, the national herd being currently only around 600,000 heads of cattle (1.5 million in 1990).

Agriculture will continue to be a key sector in the stabilisation of the DRC economy. That is why policy and decision makers envision revitalising the productive structure of a rural-based community based on a modern agro-industrial production and strengthening small farmers while ensuring the conservation of natural resources. Hope is that this vision will be realized by the harmonised strategy of the agricultural and rural sector adopted in April 2010.

We are convinced that Ireland, with its huge and worldwide recognised expertise in agriculture and food can play a very important role in this sector in DRC.  Irish agri-businesses could tap in to opportunities offered by the DRC market and reap the latent possibilities.