and a Great Day's Racing

It’s Friday 6th July 2012. Martin did me a favour and got all the articles to me for uploading early for DPNlive.  I started them at 2.00pm and finished them early at 8.30pm, all except for the music – (this week it was ABBA) – and the artisan – (Sarah Gough, Mileeven Bees) articles.  These I put up on Sunday and Monday.  I was going to Skerries for the weekend, to stay with Tommy & Annette Farrell for the annual Skerries 100 motorbike races.  Every year I go there with my wife Loreto, who is from Skerries.  You can read about the 2015 racing here, including the tragic death of Dr John Hinds. 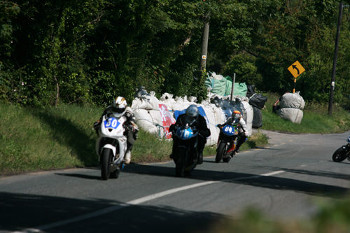 Skerries_100_2012The Skerries 100 Open Road Race circuit is presently 2.92 miles long.  It used to be 7.1 miles long and went through the main streets of the town when it started on 6th July 1946.  The winner then was 26 year old Harry Turner who rode a 348cc Norton over 14 laps.  The day’s activities ended with a very well attended dance in the Tower Ballroom. It was the start of a success story that continues to the present day.

You see Tommy is a motorbike racing enthusiast and co-incidentally, he happens to live on the course.  We were invited down for the weekend and arrived at 9.30pm, just in time to miss the practice session in pouring rain.  It was restricted practice because of the conditions, but it was still necessary in order to arrange the placings for the main races the following day.

After a while we went out for a few pints to Joe Mays pub on the harbour.  It’s the most beautiful setting you can imagine and you wouldn’t get better even on the Costa del Sol. The only difference, it was pouring rain.  Normally on race nights the harbour and town are buzzing with excitement with fabulous motorbikes everywhere.  It’s like an extravaganza of motorbikes that you just have to stop and look at some of them.  This year – nothing! It’s been pouring rain all week, even Friday, and Saturday is due to be no different, or so the weatherman says.

Saturday morning comes and I’m woken at 9.00am by motorbikes screaming around the closed roads.  I got up.  Annette made me a big fry-up brekkie and I got my cameras ready.  I went out around 10.30 to the driest day with brilliant sunshine.  It was so sunny; I had to put on some P20 and a hat.

The racing started at 10.37 with the Classic 250-350cc Championship race.  It was a relatively slow race with a top average lap speed of only 86.292 mph and was won by Keith Costello.

I was getting some great photos.

After that I walked back up the course about a half a kilometre and found a good spot for the Junior 250cc Championship Race that started at 12.24.  William Dunlop won this again at a speed of 99.846mph.  More great photos.

After that I made my way back to Tommy’s house because the memory card on my camera was full and I wanted to get another one.  Besides, it was lunch time.  Tommy’s son John made some sandwiches.  The garden was filling up and people were drinking beer.

Skerries 100 race circuitAt 12.59, the 600cc Championship Race started. Now these guys were fast.  William Dunlop must have had a bad start because in one lap he moved from seventh to third place.  Then catastrophe!  Just where I was standing at the last race, William came off his bike at about 130 mph.  It’s said that he got a blowout.  He was going so fast that his bike travelled on for about another 400 metres.  People said that he broke his arm.  The race was stopped.  Ryan Farquhar won it at an average speed of 105.313 mph.

If you look at the map on your left, just click it to enlarge it, Tommy’s house is on the hairpin between Gillies Leap and the Shady Lane.  It’s a first gear corner where the bikes practically come to a stop from travelling at around 200kph in a matter of seconds.  That’s about 130mph.  Then they take off again like a bat out of hell and hit about 150 mph.  Tommy put his own ‘grandstand’ on his side of Shady Lane.  Actually, it was a few planks of timber on a few crates.  But it did the job.  Tommy’s grandstand is about 100 metres up from the hairpin and I got brilliant photos of the bikes coming out of the corner, many of them doing wheelies.

I commented that many of my photos show bikes with their front wheels off the ground and Tommy told me that at the Isle of Man TT circuit, which is 37 miles long, it was calculated that the front wheels are off the ground for three miles.  I suppose it’s one way of saving your tyres!!

Next is the Grand Final at 4.48.  Now these guys were really fast.  Ryan Farquhar won again – his fourth win – at a speed of 108.729 mph.  Ryan stole a dramatic final lap lead from Michael Dunlop to deny the Ballymoney man, who had been ahead for almost the entire race with John Burrows finishing third. 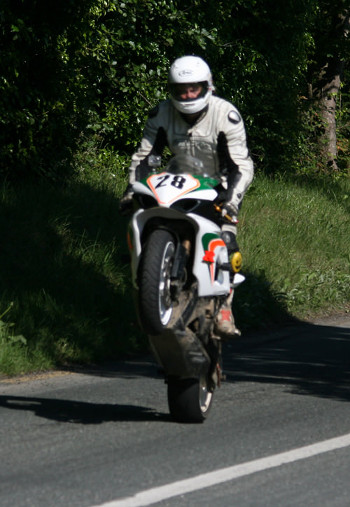 Skerries 100 2012. Paul Gartland doing a wheelie for the cameraSome of the racers must have seen me taking photos at Tommy’s grandstand on the Shady Lane because when a race ended I would give them a wave with my left hand and take a photo with my right and some of them would acknowledge by doing some great wheelies.

The final ‘race’ of the day wasn’t actually a race; it was a sort of display, where sidecars did three laps of the track.  It was amazing watching these guys.  They couldn’t race anyway because the roads were too narrow to allow them to overtake.

It transpired that William Dunlop didn’t break his arm.  He dislocated his collarbone and will miss this week's Southern 100 races on the Isle of Man, and is also set to sit it out the Armoy races at the end of the month.

"There are no fractures but I have dislocated a collarbone and have a lot of bruising. I don't have a lot of movement in the arm and I'll be lucky to make it back for the Ulster Grand Prix," added the 26-year-old William.

It was a great days racing.  Better still it was dry and sunny.  Bernie Mackle and his son, Adam, who came over from England on his Ducati ST4 for the races got sun burnt.  At least they can prove to their friends that it was sunny in Skerries when it was pouring in England.

I got over 300 great photos and then I was on BBQ duty for the next few hours.  Burgers, chicken, pork and loads of salads that Annette and Loreto made.  Add in a few pints, great banter and music.  It was like being on your holidays and it was warm enough that we didn’t move indoors until around 9.30.  I got to bed around 1.00am.  A great day, great weather, good photos, great food, drink and friends and nobody badly injured, I can’t wait for next year.

This is the Junior Support race. Wayne Hall was racing a Honda RVF 400.