The Atlantic Ocean Is Cooling Down

Temperatures in the Atlantic Ocean will alter weather conditions around the world. 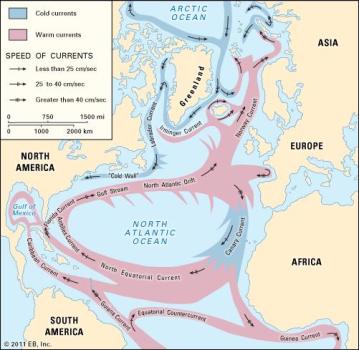 Currents of the Atlantic OceanTropical Storm Ana piqued the interest of many meteorologists last month as it progressed toward Myrtle Beach. The storm began life as a tropical depression near the Bahamas on May 6th, an early start to the season which doesn’t officially begin until June 1st. The next storm: Tropical Storm Bill has been making its way across the Gulf of Mexico this week and made landfall on June 17. All this activity means the Atlantic Ocean hurricane season is off and running. The Atlantic Basin has seen its highest storm activity ever recorded over the last 15 years, the most active being 2005 with 31 tropical cyclones. Climatologists believe this activity is about to slow down.

The world’s oceans typically cycle between warm and cold phases. In the Pacific Ocean, these are known by the names El Nino` (warm phase) and La Nina` (cold phase). On average, the Pacific cycles every 3-7 years, causing drastic changes to the world’s weather. The Atlantic also cycles between warm and cold phases too, but it is considerably longer: 50-70 years. Like its El Nino`/ La Nina` causing, the Atlantic Multidecadal Oscillation can also alter the worlds weather conditions. The current warm phase is to blame for droughts in the Midwest United States, warmer conditions in Ireland and Great Britain, and increased hurricane activity. Many climatologists believe that is all about to end and the cold phase is coming.

During a warm phase, Atlantic Ocean temperatures are an average of 1⁰ F above those of a cold phase. While that may not seem like a significant increase, over an area of 41 million square miles containing quadrillions of gallons of water, that is a lot of heat. Not only does this heat contribute to stronger storms, many scientists believe it is linked to the extreme wintery conditions seen in recent years across the United States and Europe.

To predict the warm and cold phases of the world’s oceans, scientists study ocean currents. As waters near the equator warm up from solar radiation, currents (Gulf Stream, North Atlantic Current) transfer the warm tropic water to colder regions. During a cold phase, the currents weaken, decreasing the amount of warm water that flows to the poles. The cause of the change in current strength lies in the North Atlantic Oscillation (NAO), a pressure system that controls the Jet Stream. The NAO can have a warming or cooling effect depending on where it directs the Jet Stream. Over the last 100 years, there have been three major changes to the NAO, warm phases in the mid-1930s and 1990s, and a cold phase in the 1960s. Based on research on the NAO and the Jet Stream leads scientists to believe that we are entering a cold phase. 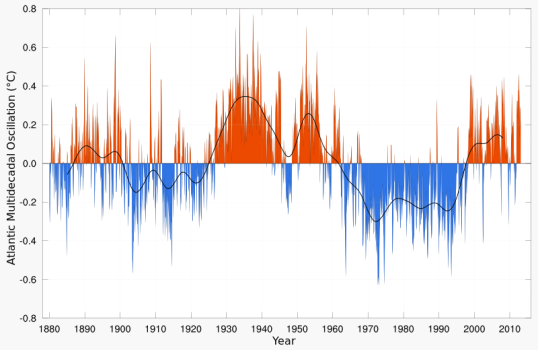 Atlantic Multidecadal OscillationWhat can we expect from a cold phase? Many believe that it could have a cooling effect on global temperatures as well as lead to a sea level rise. Colder winters and milder summers can be expected in the United States and Europe. Drought conditions could improve in the Midwest United States and the Pacific Northwest could experience wetter weather. North East Africa could slip into major droughts as well.

The Atlantic Multidecadal Oscillation is a phenomenon that scientists have only recently began to understand. They cannot pinpoint when the exact shift toa cold phase will happen but temperatures have been trending cooler for a number of years and a few instances of a temporary cold phase occurred. Some think it will switch in the next few years, others believe the current warm phase will last until 2035.

Contact Daniel on This email address is being protected from spambots. You need JavaScript enabled to view it.