Do swimmers have to be afraid to enter coastal Carolina waters? 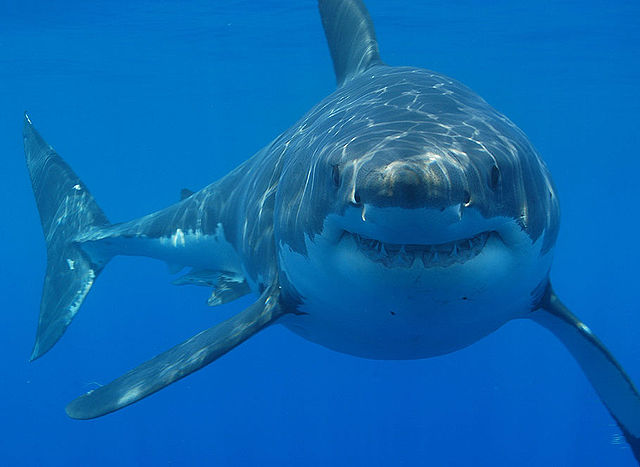 The very mention of sharks conjures up images of the classic movie Jaws. A great white that terrorizes a coastal community is enough to make anyone scared to be anywhere near these creatures. I frequently get the opportunity to discuss sharks. Even above my desk is a picture of a cow that states: You are more likely to get killed by a cow than a shark. In the United States, about 19 shark attacks occur each year with an average of one fatality every two years (cows kill 20 Americans every year). Dogs, bees, and ants are all responsible for more human fatalities than nature’s perfect predator. In fact, tripping in your own home is far more dangerous than sharks with over 6000 deaths per year. Coastal North Carolina has challenged these statistics recently however, with a surge in shark attacks. 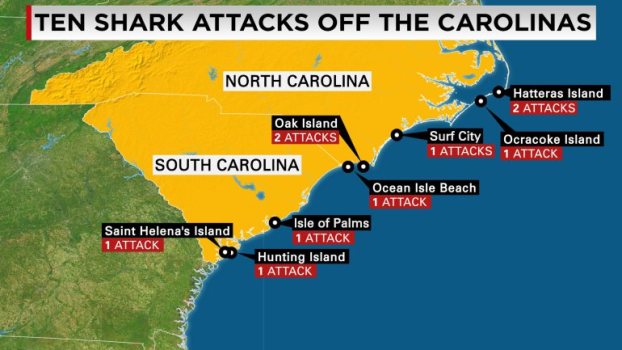 A map detailing 10 shark attacks off the coast of the Carolina's Courtesy of CNNSince the beginning of June, there have been eight reported shark attacks along a 100 mile stretch of coast in North Carolina. It started June 11th with an 11 year old girl who suffered minor injuries after a shark bit her boogie board. The latest, a 32 year old marine who was hospitalized on July 4thafter being attacked outside of Surf City, North Carolina. Three additional attacks were also reported along South Carolina’s coast as well. This is the highest level of frequency in shark attacks the state has seen in the 80 year history that such records have been kept. Injuries have ranged from only minor cuts and bites to victims needing limbs amputated and a dolphin also washed up ashore after being bitten. Luckily, no one has suffered a fatal injury. Only 2 people on record have died from a shark injury in North Carolina waters, the last being on September 10, 2001.

The surge in shark attacks along the Carolina coast doesn’t seem like an anomaly. According to the International Shark Attack File at the Florida Museum of Natural History, shark attacks have been increasing every decade since 1900. Scientists point to a dramatic increase in people swimming in the oceans as the primary cause. 2014 had 130 shark –human interactions worldwide. North American waters saw the highest number of these interactions, 45.

Why is there such a high concentration of attacks on the east coast? Shark expert George Burress at the Florida Museum of Natural History says there are several contributing factors. Summers have been warmer than usual, leading to warmer waters, much warmer than the Pacific. A lack of rainfall also plays a role as less freshwater runoff reaches the sea, causing a rise in salinity. Sharks prefer these conditions and migrate to these waters. There have also been record numbers of nesting sea turtles and menhaden fish have also been more prevalent. All of these conditions coupled with more people swimming in the ocean leads to more human-shark interactions and higher risk of an attack. 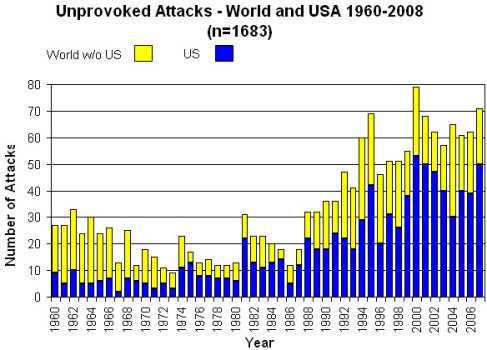 Source - The International Shark Attack FileTypically, sharks react to humans swimming and splashing in the water instinctually. They mistake human limbs for flippers and fins. In most cases, the sharks recognize that human flesh does not have the same taste or constancy of its usual prey. The attacks have not seemed to stop people from going to the beach but many have been wary of swimming in the water.

Despite the increased numbers of shark attacks in the North Carolina waters, it is still highly unlikely to be bitten by a shark. While it is difficult to predict when and where someone will get attacked, there are precautions that people can take to reduce risk even more including: Avoid swimming in the ocean at night or at dawn and dusk. That is when sharks are most active. Do not swim to far from shore. Stay out of the water if you are bleeding. Stay away from piers, especially where people are fishing. Avoid swimming in waters with a lot of bait fish, or dolphins. Do not where jewelry or bright clothing, these attract sharks.