Written two years ago, on the first anniversary of her dear friend's untimely death, Cara asked that we re-run the piece today, the third anniversary, as the sentiments as expressed in 2013 remain as true and heartfelt now as they were then. 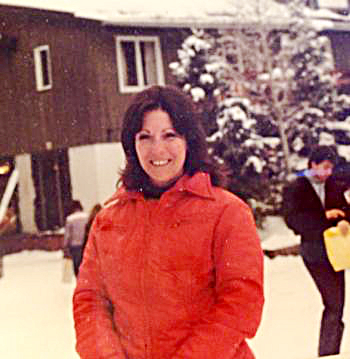 Janis ZernerWhile I haven’t quite reached the age that my contemporaries are dropping like end-of-summer flies, I have experienced the loss of a few acquaintances in my life. Last year, though, it was not an acquaintance but a friend, Janis Dominguez Zerner, whose death I so keenly mourned. Born only three weeks before I was, I suppose it was silly of me to defer to her as my elder, but in many respects I did, from the moment we met. My youngest and her only child became fast friends early on; we lived in houses separated by only one neighbor, so we saw quite a bit of one another. By the time her daughter started school, I was an old hand at the bus stop and Janis became the second mom on the scene. As soon as that bus pulled away, carrying off our respective darlings, we proceeded either to her house or mine for a quick cup of coffee. All too often, we’d exclaim after two hours that the day was getting away from us and we’d part ways until the next morning. Over the years, those early-morning coffee klatches became eagerly anticipated time slots during which we poured out our joys and troubles, pondered the problems of the world (and solved a great many of them—not that anyone appreciated all the time and effort it took us!), laughed, cried, or just sat ‘n’ sipped, savoring the quiet.

We both experienced a miscarriage in the same month. Afterward, we held each other closer. She once insisted that I see a doctor for an illness that had gone on too long, piling me into her car and driving me to the doctor’s office, where she marched up to the desk and hollered, “This woman must be seen IMMEDIATELY!” When I emerged from the examining room to tell her that I had a significant kidney infection, the expression on her face was priceless: Janis didn’t always hesitate to say, “I TOLD ya so!” over her little triumphs, but she didn’t have to say anything at all that day. The gleam in her eye said it all. Over the next couple of days, mysterious plastic-packaged, home-cooked food items appeared suddenly in my kitchen, always enough to feed my family of six.

Mysterious isn’t quite the word; her “meals on wheels,” gobbled up by my kids, had simply never been seen (not to mention cooked) in my household. Janis was a phenomenal cook, genetically predisposed to excel in the kitchen via her Spanish grandfather, and trained from childhood by her Sicilian grandmother, both talented amateur chefs. In only one area of the culinary arts did I ever best her. Janis’s daughter, Sara, is, as I mentioned above, an only child. As such, Sara seemed to love the hubbub that abounded in my house, so she was a frequent guest. One afternoon, Sara called her mom on the phone to ask if she could stay for a simple midweek dinner of spaghetti. Janis told Sara that she was making spaghetti, too, to which Sara whined, “But I like Mrs. O’Donnell’s sauce better.” HAH!

Standing five feet away, I could hear Janis fuming through the phone. “Put Mrs. O’Donnell on the phone right this instant!” she demanded of her half-chuckling/half-terror-stricken daughter. Then to me: “YOU! You heat sauce from a JAR and she likes yours better!” she sputtered.

“You mean there’s another kind?” I inquired with faux innocence. Laughing, Janis agreed to let Sara stay for dinner.

Poor Sara, now a married woman and an accomplished cook (and cooking blogger), never heard the end of that story. Thereafter, I periodically reminded Janis that I was probably the one responsible for developing Sara’s interest in the art of cooking. Double HAH!

That’s the relationship Janis and I had: One of good-natured teasing, long of memory but short on grudges and disagreements. She never gave anything less than sound advice. I always listened but often wish I had taken more of it; it was that good.

She once tried to teach me to dance. I believe that was Janis’s only failed attempt to impart a skill. Light on her feet, she was—oh, and what feet she had! Clad always in the cutest of footwear—flats, mostly—shoes might have been her one luxury. This is not to say that the rest of her attire wasn’t stylish, but those color-coordinated shoes were her signature trademark. In her eulogy of the philosopher Hannah Arendt, one of Mary McCarthy’s most poignant statements was, “She had small feet.” Sounds trivial, but think about it: Only a true friend would think to notice, remember, and believe it of importance enough to remark upon such a personal yet endearing attribute of a larger-than-life personality.

Janis’s other attributes were too numerous to list here but, like all of us, she had her faults. She could expound on a topic in a rant so protracted and colorfully (but never vulgarly) worded that the listener’s ears would ring. Sometimes she thought herself right about something and there was no disabusing her of that notion. When this occurred, however, she was able to agree to disagree. Now that I look back on the rare arguments between the two of us, I realize that in half of them, neither of us was entirely right or wholly wrong. Over the years, we grew older and (presumably) wiser together.

When I moved to Georgia, saying good-bye to Janis was particularly difficult. We did keep in touch via phone, e-mail, and visits, but our regular weekday-morning coffees were a thing of the past. When I returned to New York sixteen years later, she was the first friend to welcome me back. My return was the result of a painful life transition. As such, I was enveloped for a good long while in a miasma of emotional anguish, but she was there for me all the way. When Mr. Melanoma, the formidable adversary she had been battling for six years, decided to throw her a massive punch causing a sudden turn for the worse, I happened to be in her kitchen. We were drinking the coffee I had made in a percolator on her gas stove because the electricity was out, the result of a major summer storm three days prior. Pulling out my cell phone—thank God, there was cell service by then—I called 911 for an ambulance, then speed-dialed a mutual friend who called Janis’s devoted husband, Michael. Tests and an overnight stay at the hospital yielded a dire prognosis. From that day on, we all played a waiting game, but we were not without hope. While we waited, Janis reassured me that God had placed us in each other’s life for a purpose. It was our responsibility, she concluded, to continue to confide in, console, admonish, encourage, and otherwise uplift one another in the time we had left. And so we did.

No longer permitted to drive, Janis’s family and friends became her chauffeurs. We went out as always for a time but Janis increasingly held court in her family room. On one of her last shopping trips, I drove her to the nearby Americana Shopping Center in Manhasset (the Rodeo Drive of Long Island’s Gold Coast). She was invited to a bris the following week and wanted to buy the baby boy’s gift at Tiffany. No sooner had we walked through the vault-like doors of the iconic store than she started one of her comic routines. Pointing to one pretty (and supremely pricey) doodad, she exclaimed in a voice sweet enough to induce a diabetic coma in the listener, “Oh! This is utterly exquisite!” Then, her voice dropping an octave, she went on: “But it’s about as useful as a screen door on a submarine!” Classic Janis. She could relate a complex lengthy joke flawlessly (and in any accent required in the telling of it), but she was a Grand Master when it came to delivering either an old biscuit of a bon mot or an original witty one-liner.

Her last weeks, spent in the extraordinary palliative care unit of our local hospital, were not easy in the least, but my friend bore each day, each moment, with an enviable faith, dignity, and humor right up to the end. Her six geographically closest friends visited her in the hospital almost daily. I think we all agree that we derived more comfort from her than we gave in those visits. (Secretly, I have to add, we all believe ourselves to have been her “best friend,” but don’t tell anybody I said that! That’s just the way Janis always made us feel as individuals.)

If you are fortunate enough to have a friendship as dear to you as mine and Janis’s was to me, do cherish and nurture it. Fuel it, even if you occasionally duel through it, all the way. We who still miss Janis gathered to celebrate her life almost one year ago. We are all immensely grateful that we were able to let her know how much we loved her while we were still able to hold her warm hands. Take advantage of that same opportunity with the special friend in your life and you will never, ever regret it. That’s a promise.